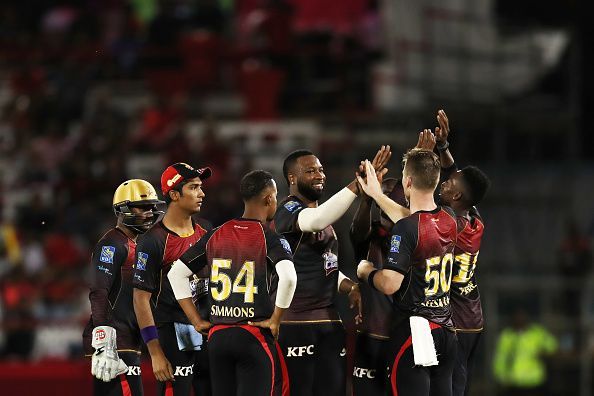 Asked to chase an uncomplicated 168 at Queen’s Park Oval, TKR marched to their target in the 18th over, to win their third on the trot and sit on top the standings on six points.

Simmons made a fiery 63 off 39 balls at the top of the order while Ramdin hit an unbeaten 50 from 38 deliveries to see his side home alongside captain Kieron Pollard who finished 26 not out.

West Indies opener John Campbell had earlier top-scored with 43 off 42 deliveries as Zouks, choosing to bat first, rallied to 167 for five off their 20 overs.

The loss was the second straight for the Zouks following their opening defeat to Guyana Amazon Warriors last Thursday in Georgetown.

Zouks had a whirlwind start compliments of Cornwall, who struck five fours and two sixes to energize a 42-run opening standoff 22 deliveries with Fletcher.

Off-spinner Sunil Narine broke the stand when he had Cornwall lbw missing a sweep but Fletcher, who counted two fours and a six in a patient 32-ball knock, added a further 30 for the second with Campbell.

Fletcher holed out in the deep in the 10th over but the 46-run, third-wicket stand that followed between Campbell and Zadran was a slow one and Zouks were stalling at 118 for three in the 16th over when the partnership ended.

Captain Sammy then belted two sixes in scoring 16 from 13 balls, in a 39-run fourth wicket with Campbell, to help the innings along.

The target was never going to be enough to really challenge TKR even though they found themselves 34 for two in the fifth over after losing Sunil Narine (7) and Tion Webster (2) cheaply.

Simmons then tore into the Zouks bowling, counting five fours and five sixes as he added 72 for the third wicket with Ramdin whose knock included five fours and a six.

With victory in sight, Simmons was stumped off left-arm spinner Kavem Hodge and Ramdin formalized the result in an unbroken 62-run, fourth-wicket partnership with Pollard, who punched two sixes and a four in a quick-fire knock.