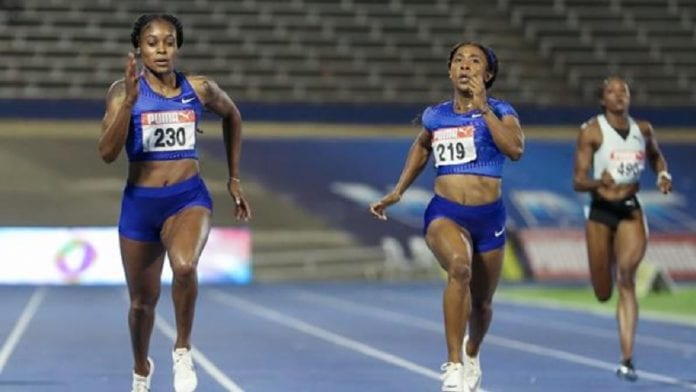 Jamaican Olympic champions Elaine Thompson-Herah and Shelly-Ann Fraser Pryce are back on the track for the 2020 season after a break in competing due to the coronavirus pandemic.

The Velocity Fest, which began last month, is the first track and field event to be held in Jamaica since early March. The meets have taken place over several weekends, starting in June, and have showcased the sprinters’ return to fine form.

At the first meet on July 11, the double Olympic sprint champion and recently married, Elaine Thompson-Herah finished second in her first 200m race of the season. She clocked 22.98, behind Sherika Jackson, while Shashalee Forbes was third.

At the same meet, the four-time champion Shelly-Ann Fraser-Pryce clocked a world-leading 11:00 seconds in the women’s 100m sprint to beat the previous fastest time in the world this year – 11.05 – set by American Sha’Carri Richardson in Montverde, Florida on July 4.

The two-time Olympic champion Fraser-Pryce took the victory well ahead of Shashalee Forbes, who finished second on 11.49 and Bahamian Anthonique Strachan (11.84) who finished third.

Both Fraser-Pryce and Thompson-Herah have since been trading wins in the Velocity Fest meets since the first event in July.

Thompson-Herah’s 22.19 win, also on Sunday, was the time that stole the show, as it was easily the fastest over the three sections as there was no final for the event. The time also represents the second-fastest in the world this year and a season’s best for the sprinter.

Despite her impressive return to the track so far, she will not be taking part in this week’s season-opening Diamond League in Monaco on August 14.

She had been confirmed for meet at the end of July. However, MVP Track Club president Bruce James said the embassy, in Jamaica, that issues visas for France has not yet reopened since it was closed because of the COVID-19 pandemic and she is currently without the required Schengen visa.