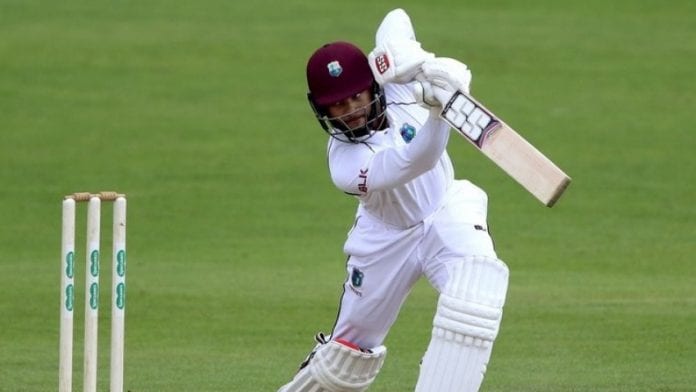 West Indies selectors on Friday axed batsman Shai Hope for the Test tour of New Zealand following a protracted run of poor form, but have recalled the left-handed pair of Shimron Hetmyer and Darren Bravo for the two-match series starting next month.

Hope, the elegant right-hander who turns 27 next month, was the only major omission in a 15-man squad announced by Cricket West Indies for the November 27 to December 15 tour which also comprises three Twenty20 Internationals.

Considered one of the shining lights in West Indies cricket, Hope has failed to live up to expectations in the Test arena ever since scoring hundreds in both innings of the Leeds second Test on the 2017 tour of England.

And while he boasts an excellent average of 52 in One-Day Internationals, he has averaged a meagre 26 from 34 Tests since making his debut five years ago.

More damaging is the fact the Barbadian has averaged only 19 from 17 Tests inside the last two-and-a-half years and his mediocre returns of 105 runs from six innings in the three-Test series against England last July, sealed his fate.

Convenor of selectors, Roger Harper, told an online media briefing afterwards that Hope had not been discarded but was being afforded the opportunity to focus on rebuilding his form and confidence in the longest format.

“I think we can all agree that Shai Hope has not been at his best in Test cricket for quite a while,” Harper said.

“He’s performed very well in the 50-over version but in Test cricket, he has not been anywhere close to his best and this has been going on for a while.

“So we’ve given him an opportunity to go back and work at this aspect of his game and get his batting up to the sort of standard that we know he’s capable of, because I think there is a tremendous future for him in Test cricket but he needs to get his batting back to where it can be.”

He continued: “I think sometimes by continuing to select a player that isn’t doing well, sometimes you do them more harm than good.

“I think we recently saw the situation with Darren Bravo who had a pretty lean trot in Test cricket and he was given a break and he’s shown he’s gotten back his hunger, he’s performed in all formats of the game.

“He has an important part to play in the future of West Indies cricket and that is what this is all about – giving him an opportunity to find his mojo again in Test cricket and come back a stronger and better player.”

Bravo and Hetmyer, along with all-rounder Keemo Paul, all of whom declined selection for the tour of England, will now feature in the squad.

The 31-year-old Bravo has not played in the longest format since India’s tour of the Caribbean last year August after being dropped for the one-off Test against Afghanistan in India last November, but his prolific form in the domestic first-class and limited-overs tournaments hauled him back into the selection frame.

Hetmyer, currently campaigning in the Indian Premier League, has been a fixture in the Test squad in recent times having played 16 matches since his debut in 2017.

Harper said both batsmen, along with Paul, would further strengthen the West Indies top order which has come under heavy scrutiny for its inconsistency.

“The return of Darren Bravo, Shimron Hetmyer and Keemo Paul will bolster the team,” Harper pointed out.

“I expect that Darren will solidify the top-order, hopefully making it more productive, while Shimron gives the squad more options in the middle-order and it is another opportunity for him to show how good a player he is.

Left-handed opener John Campbell has, meanwhile, survived the axe following a horrible England series that saw him scrape a mere 84 runs at an average of 16.

And with just one fifty in 18 innings and an average of 25 overall, Harper conceded Campbell’s place came under the microscope but it was decided to persist with the Jamaican.

“There were a few other players who were considered and there was a lot of debate about this in our meeting but in the end, the panel decided that they’ll give John Campbell another opportunity to cement in his place in the team and show what he can really do,” said former Guyana and West Indies off-spinner.

“It is an area that has been concerning us for a while – the opening pair and the number three spot – because you depend on those partnerships, the first and second wicket partnerships, to really build a platform on which the team can build big totals.”

As expected, the side will be led by all-rounder Jason Holder and will be accompanied by six reserves in Nkrumah Bonner, Joshua DaSilva, Preston McSween, Shayne Moseley, Raymon Reifer and Jayden Seales, in keeping with the new protocols for tours amid the ongoing COVID-19 pandemic.