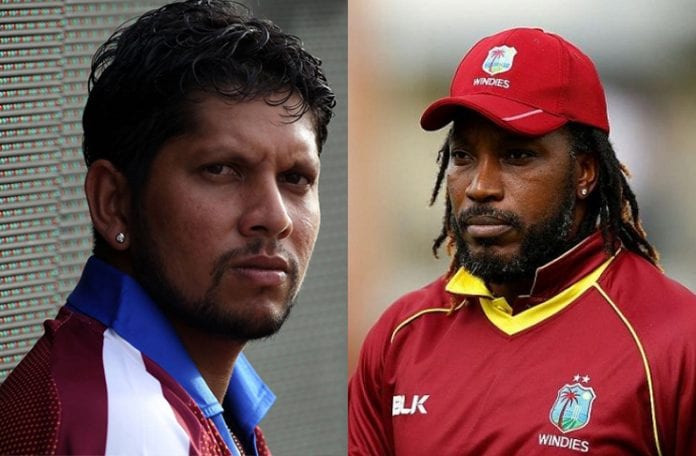 In a statement Thursday, the former West Indies captain Sarwan “categorically denied” he was involved in any decision making to end Gayle’s tenure at the Kingston-based Tallawahs in preparation for the upcoming season set to bowl off in August.

“I categorically deny any involvement in the decision or the decision-making process, which led to Gayle’s non-selection to represent the Jamaica Tallawahs in the 2020 Caribbean Premier League (CPL) tournament,” said Sarwan, who served as a member of Tallawahs’ management team last season.

“In fact, the management of the franchise itself has issued a public statement that, ‘the truth is that this decision was made collectively by the ownership and management team which did not include Mr. Ramnaresh Sarwan and based purely on business and cricketing reasoning’.”

He added: “Let me make it abundantly clear, I have played with Gayle from the inception of my international career and I have always respected him as an extraordinary talent, a colleague and most importantly, a close friend.

“Hence, my utter shock by these scandalous allegations. He was welcomed in and is loved by, my immediate family and has hurt them terribly.

“Fans will recall, that when Ian Chappell called for Gayle to be banned from international cricket because of remarks he made to a female journalist, I issued a public call for fans to rally around Gayle. I stood up for him on every such occasion.”

In an emotionally-charged three-part video late Monday, Gayle launched a scathing attack on Sarwan, labelling him a “snake” and blaming him for his exit from the Tallawahs.

Gayle, himself a former West Indies captain, accused Sarwan of vindictiveness. After returning to Tallwahs last year following two seasons with St Kitts and Nevis Patriots, Gayle said he told then assistant coach Sarwan he was not experienced enough to be head coach.

The 40-year-old Gayle claimed Sarwan was upset by the assessment, but the Guyanese again denied this was true.

“In 2019, I was appointed head coach. I reached out to Chris and discussed with him the selection of a team. I did so out of respect for him,” Sarwan explained.

“In my conversation with Gayle about the team, he informed me that Donovan Miller, a Jamaican and a very close friend of Chris, should be appointed head coach as he would better understand the culture of the Jamaican players.

“I conveyed Gayle’s view to the CEO, informing the CEO that I would be happy to step aside for Miller’s appointment, given that Chris feels strongly about his appointment. My priority was what would be in the best interest of the team.

“Gayle is fully aware of the background, yet he accuses me of fighting to be head coach.”

Further, Sarwan also dismissed as “a total fabrication” the Jamaican’s bizarre charge that 24 years ago he was responsible for him being sent home from a West Indies Under-19s tour in Barbados, because he (Gayle) stayed up late watching television.

“No competent management would remove him from a series, a player of Chris’s caliber on such a trivial allegation,” Sarwan said.

Further labelling Gayle’s accusations as “rantings”, Sarwan contended the incident had “done immeasurable damage to the ‘gentleman’s game’ of cricket, in particular, West Indian cricket, and set a bad example for younger players.

“It is my sincere hope that Gayle’s damnation has not caused irreparable damage to the unity and brotherhood which cricket has forged across the West Indies,” Sarwan stressed.

“My deep concern, is that young and upcoming players who regard Gayle as a role model, may think that this is an acceptable way of addressing problems which may befall them in their careers.”

Gayle is the greatest ever T20 batsman with 13 000 runs and 22 hundreds, and is set to turn out for St Lucia Zouks in the CPL.