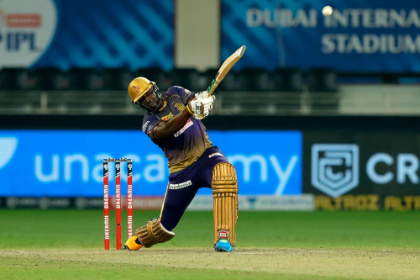 Sent in at the Dubai International Stadium, KKR piled up an impressive 191 for seven off their 20 overs with captain Eoin Morgan top-scoring with an unbeaten 68 off 35 balls.

Rahul Tripathi chipped in with 39 and opener Shubman Gill, 36, while Russell blasted three sixes and a four in a season-best 11-ball 25 batting at number seven.

In reply, Royals could only muster 131 for nine off their 20 overs as Australian fast bowler Pat Cummins sliced through the innings with four for 34 to deliver victory for KKR.

England’s Jos Buttler top-scored with 35 and Rahul Tewatia, 31, but Royals failed to mount a coherent run chase and never recovered after slumping to 37 for five at the end of the fifth over.

With the victory, KKR moved to fourth on 14 points from their full complement of games while the eighth defeat for the Royals left them bottom of the table and out of playoff contention.

KKR started poorly, losing Nitish Rana without scoring to the day’s second delivery when he feathered a short ball from Archer behind.

Tripathi joined Gill to add 72 for the second wicket before KKR lost four wickets – including Sunil Narine without scoring – for 26 runs in the space of 25 balls to crash to 99 for five in the 13th over.

Russell, out of the side in recent weeks due to injury, then inspired a 45-run, sixth wicket stand with Morgan before picking out deep cover in the 16th over with 19-year-old seamer Kartik Tyagi.

Morgan, who belted five fours and half-dozen sixes, bolstered the innings by putting on a further 40 for the seventh wicket with Cummins (15) as KKR gathered 59 over the last five overs.

Archer was outstanding, conceding only 19 runs from his four overs, and finished the tournament with 20 wickets at 18 runs apiece.

KKR then kept the pressure on when Cummins knocked over both Royals openers Robin Uthappa (6) and Ben Stokes (18) cheaply, and Buttler’s 43-run sixth-wicket stand with Tewatia went in vain.

In Abu Dhabi, both West Indies left-handers Chris Gayle and Nicholas Pooran failed as Kings XI Punjab also missed out on the playoffs, going down to Chennai Super Kings by nine wickets.

Sent in at the Sheikh Zayed Stadium, Kings XI tallied 152 for six off their 20 overs with Deepak Hooda hitting an unbeaten 62 off 30 balls at number six.

Gayle, who made 99 in his last outing, struggled with 12 from 19 balls before perishing in the 12th over while Pooran managed only two and fell an over earlier.

Opener Ruturaj Gaikwad then top-scored with 62 not out off 49 balls as CSK, also eliminated from the playoffs, chased down their target with seven balls to spare.