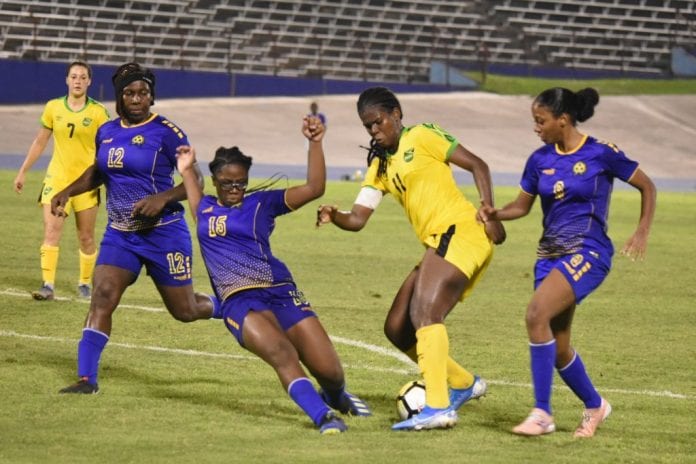 KINGSTON, Jamaica – After defeating Cuba 12-1 in their first Olympic qualifier, the Reggae Girlz continued their winning streak last night with a stunning 7-0 win over Barbados.

With their star player, Khadija “Bunny” Shaw on the field after missing the first qualifier, Jamaica remained at the top of Group B with six points and 19 goals to their stats, while conceding only one.

Cheyna Matthews continued her rich form with goals in the second and 23rd minutes. Sashana Campbell added a third goal in the 33rd minute, while Trudi Carter (34th and 36th) also had a brace.

Chinyelu Asher (70th) and Shaw (90th) got one apiece with the other being a sixth-minute own goal by defender Tia Brigg-Thompson.

Reggae Girlz assistant coach Hubert Busby said the team played well but the performance could have been better.

“It was a good game but there were lows,” he said. “Goals change matches and we could have had some more. But their ‘keeper’ had a very good game.”

In the other Concacaf Women’s Olympic Caribbean Qualifiers, Cuba hammered United States Virgin Islands 6-0 in the curtain-raiser, to take second place in Group B with six points from three games, while Barbados and St Lucia have three points each. Only the group winner will advance to the final round.

The Reggae Girlz will face St Lucia on Sunday at the National Stadium in Kingston, followed by the US Virgin Islands on Tuesday.