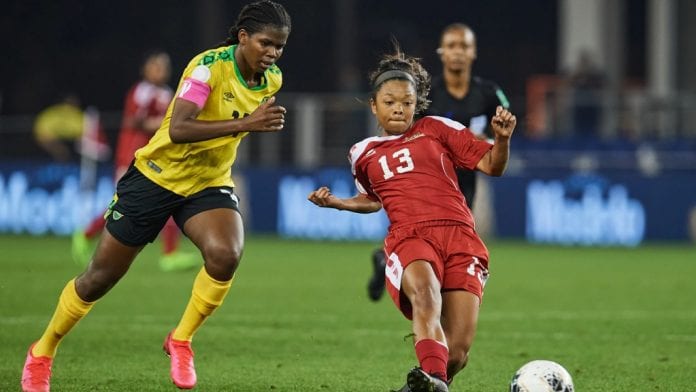 EDINBURG, Texas – The Reggae Girlz ended their 2020 Concacaf Women’s Olympic Qualifying Championship with a stunning 7-0 win over St. Kitts and Nevis in their Group B fixture on February 4 at HEB Park in Edinburg, Texas.

For Jamaica, it was a historic night as they earned their first-ever Concacaf Women’s Olympic Qualifying victory, which came four days after they suffered a humiliating 9-0 whipping against Canada.

Canada’s victory knocked the Reggae Girlz are out of contention for a spot in the Olympics this summer in Tokyo.

In order to qualify for the Olympics, the Reggae Girlz would have to make the final as the two finalists qualify.

The Reggae Girlz had lost their opening match 1-0 against Mexico.

On Tuesay’s match, the seven goals were scored by Shaw, Cameron, Solaun, Carter and McCoy. Shaw and McCoy each had two goals apiece.

The semi-final matches are set to take place Friday, February 7, at the Dignity Health Sports Park, in Los Angeles, CA.

The first of the two semifinals, scheduled for 4:00 pm, will see Costa Rica (Group A runner-up) face off against two-time Olympic bronze medalists and Group B winners, Canada.

Later that day, Group A winner and current World Champions United States will take on Group B runner-up Mexico. The match is scheduled for 7:00 pm.

The two semifinal winners will qualify for the competitions final and the Women’s Olympic Football Tournament Tokyo 2020. The championship match, also to be played in Los Angeles, is scheduled for Sunday, February 9 at 3:00 pm.