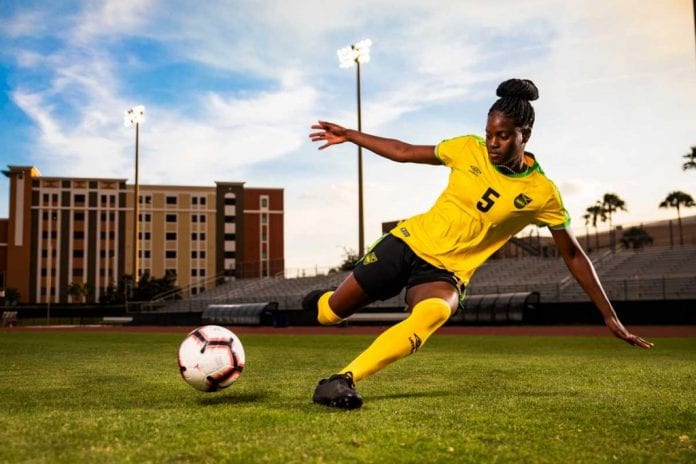 KINGSTON, Jamaica – Reggae Girlz captain Konya Plummer created history on January 16 by becoming the first-ever Jamaican to be drafted in the National Women’s League Soccer College (NWSL) Draft when she was selected by the Orlando Pride.

Plummer, 22, led the Reggae Girlz during their inaugural FIFA Women’s World Cup campaign in France last summer while a student of the University of Central Florida.

She was the 10th overall pick and the first in the second round of the draft held at the Baltimore Convention Centre on Thursday morning.

“I am very humbled for this moment,” she told Sportsmax.TV moments after her historic selection.

“I feel like this will impact the younger kids in Jamaica to show that if they work hard they can achieve what they want.”

“It does a world of good for the national programme, especially with Konya being the national senior captain,” he said.

“It will inspire young girls to understand that with hard work and perseverance they can achieve anything.”

Plummer, a St Mary native, attended Titchfield High School in Jamaica where she started playing football before migrating to Florida at age 16. She worked under the guidance of former Reggae Girlz coach Hue Menzies, who said she was one of the best young players he had seen.

She soon worked her way up to the senior national team as central defender and was named captain. Menzies said she may be young on paper, but her maturity and leadership qualities are evident in the way she carries herself.

“We have players on the team who are 33 years old and look up to her. It’s just who she is as a person,” Menzies says. “She is Jamaica. She is what Jamaica is about,” Menzies said.

She led the team through the World Cup qualifying stages in 2018, eventually helping the team secure a World Cup spot in October when the Reggae Girlz defeated Panama on penalties to secure the third and final spot during the CONCACAF qualifiers in Texas in the United States.

In 2019, her final year in college, she was American Athletic Conference Defensive of the Year, earned AAC Defensive Player of the Week twice and earned first selection to the First Team All-Conference.

UK Proceeds With Deportation Flight to Jamaica Despite Court Ruling