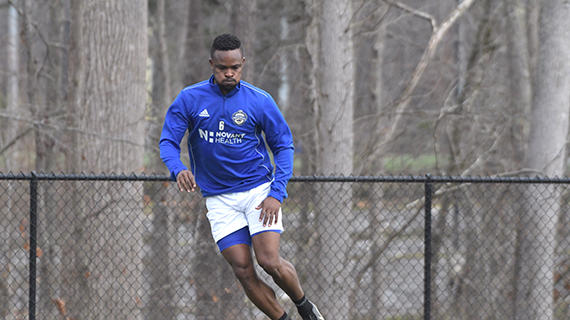 Jamaican Dane Kelly netted a hat-trick to fire Charlotte Independence to their third win in four outings in the United Soccer League last weekend, headlining a productive round of matches for Caribbean players.

Playing at Sportsplex at Matthews in North Carolina last Saturday, the 29-year-old Kelly scored twice in the first half before adding a third late on as the hosts thrashed North Carolina FC, 3-1, to win their second straight game.

Charlotte led 2-0 at the half and Kelly guaranteed the points in the 79th minute with a superb right-footed volley from the center of the box, after a sweeping cross from the right from Derek Gebhard.

Trinidadian Andre Fortune pulled one back for North Carolina in the first minute of stoppage time, driving home a low cross into the box from Manny Perez.

With the hat-trick, Kelly moved his tally for the season to eight goals.

In a Group D contest at Toyota Field in San Antonio, St Vincent and the Grenadines’ Kyle Edwards and Jamaica Under-23 star Deshane Beckford both got on the scoresheet but could not prevent Rio Grande Valley from going under 3-2 to San Antonio FC.
For Rio Grande, the defeat was their fourth straight and ninth of the season, keeping them rooted to the bottom of the group on three points.

In Group G, Guyana international Keanu Marsh-Brown netted his third goal of the season in the 28th minute but Memphis 901 FC were held to their second stalemate in three games to remain winless in five, when Bruno Lapa equalized from the spot in the 48th minute for leaders Birmingham Legion at AutoZone Park in downtown Memphis.

Memphis are bottom of the group on seven points and a single win while Birmingham are four clear at the top on 22 points.

In a top of the table clash at Lucas Oil Stadium in Downtown Indianapolis, Jamaican Devon Williams scored his third of the campaign as Louisville brushed aside Indy Eleven 3-1 for their fourth win in five outings, to take the lead in Group E with 20 points.

And at Greater Nevada Field, Haitian Christiano François scored in the 49th minute as Reno 1868 thrashed Portland Timbers 2, 7-1, to win their fourth straight and take sole possession of the lead in Group A with 24 points.