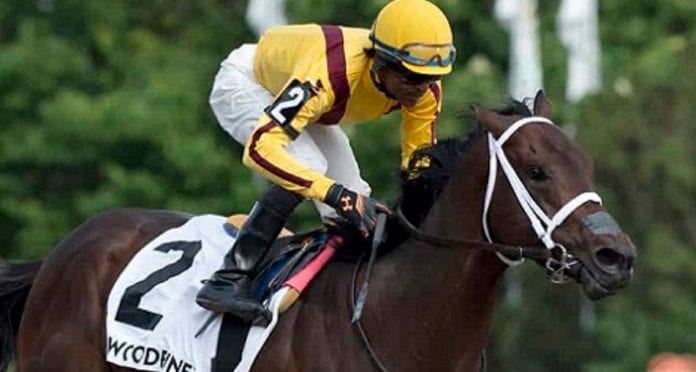 The 46-year-old Husbands, the most successful jockey to emerge from the tiny Caribbean nation, captured race five with 9-1 choice Bells of War, race seven with 3-1 bet Moonlight Bet and race nine with favourite March of Dreams.

Another Barbadian Keveh Nicholls also got in on the celebrations when he carried 18-1 longshot Robusto to a narrow win in race four going 6-½ furlongs for three-year-olds and upward.

Husbands currently lies fifth in the standings on 78 wins after another successful season which has seen him with winnings of CAN$3.7 million.

Husbands, a seven-time Woodbine champion, opened his account in a 6-½ furlong sprint when he steered the bay filly Bells of War to a resounding five-length win over the two-year-old maiden fillies.

Bells of War duelled first with Empire Angel and then with Jumping Jill Flash, before sprinting clear at the furlong pole to dominate.

Husbands was in winners’ row again when he combined with four-year-old brown filly Moonlight Rain to edge the three-year-old fillies and mares by a neck in a mile and sixteenth trip.

Get Explicit produced the early fractions before Husbands brought Moonlight Rain from mid-pack to challenge the leader and get up late.

His final win came aboard five-year-old March of Dreams when he brought the bay mare from last in the six-horse field to grab the lead at the top of the stretch and storm to the wire 2-¾ lengths clear.