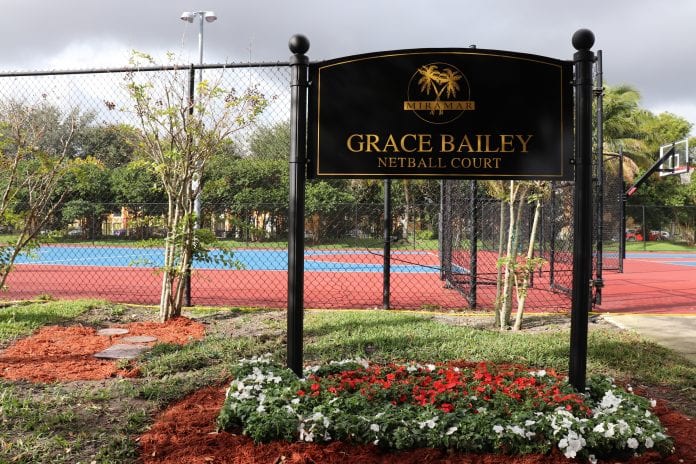 MIRAMAR – On December 11, the City of Miramar paid tribute to former longtime Miramar resident and former President of the Florida Netball Association, Grace Bailey who died on July 17.

At a ceremony at the newly renovated netball courts at the Ansin Sports Complex,  the courts adjacent to the state-of-the- art sports complex were named in honor of Bailey, in accordance to the unanimous agreement of the city commission in response to a proclamation sponsored by Vice Mayor Alexandra Davis.

At the dedication ceremony, Mayor Wayne Messam offered condolences to Bailey’s family, who was in attendance. He cited that the occasion was a moment to celebrate Bailey’s drive and her desire to ensure the sport of netball got the presence and prominence it deserved.

Vice Mayor Alexandra Davis introduced guest speaker, Rev. Dr. Edina Bayne, Development Director for the Florida Netball Association, who paid tribute to Bailey and her legacy. Rev. Dr. Bayne spoke of Ms. Bailey’s 30 years of commitment to the sport and 23 years as a Miramar resident. “Grace Bailey made netball a household name and made it her mission to share the sport with all people of all ages. She was unrelenting in her fight to ensure that the courts in Miramar and other cities were effectively utilized,” Rev. Dr. Bayne stated.

Commissioner Maxwell Chambers and Commissioner Yvette Colbourne also addressed the audience and supported the sentiments shared by all the speakers.

The dedication ceremony concluded with a plaque presentation by Vice Mayor Davis to Bailey’s family. Vice Mayor Davis stated, “Grace Bailey was a tremendous ambassador for the sport of netball. She believed in hard work and was an inspiration to so many young girls.”

The Ansin Sports Complex Netball Courts located at 10801 Miramar Boulevard, Miramar, FL 33025, are now officially dedicated to Ms. Grace Bailey, in memory of her many years of service and dedication to the sport of netball as a player, coach and mentor.