Barbadian Darian King is knocking on the door of getting into the major grand slam Wimbledon tennis competition.

King, boosted his chances by beating Italy’s Lorenzo Giustino 6-4 6-0 in the first round of qualifiers for Wimbledon, but found the going a little more tough in the second.

The Barbadian, had to fight from a set down to the United States’ Bradley Klahn, who dismissed him 6-3 and looked in the driver’s seat.

The result means King is a round away from qualifying, for the premier tennis tournament.

King’s now has to up the ante and defeat the Czech Republic’s Lukas Rosol, who has been to every major since 2013. 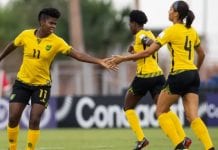