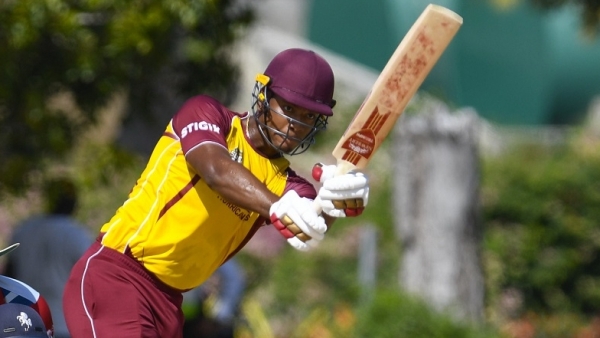 BASSETERRE, St Kitts (CMC) — Test discard Kieran Powell stroked his fourth List A hundred to cancel out a wonderful century from Assad Fudadin, as Leeward Islands Hurricanes won their third on the trot with a dominant eight-wicket victory over Jamaica Scorpions on Sunday.

Chasing 263 in the Group A contest at Conaree Cricket Centre, Hurricanes reached their target in the 46th over, with Powell seeing them home with an elegant unbeaten 121.

The left-hander struck eight fours and three sixes off 124 balls, sharing vital partnerships with fellow opener Montcin Hodge who made 64, Amir Jangoo who struck 37 and Devon Thomas who was unbeaten at the end on 32.

Opener Fudadin’s 107 had earlier formed the foundation of Scorpions’ 262 for nine from their allotted overs, after they were sent in.

The Guyanese left-hander faced 133 deliveries and struck 12 fours and two sixes, receiving support from Nkrumah Bonner who narrowly missed out on his fourth List A hundred with 97 off 81 balls.

The defeat was the second for Scorpions in as many matches, leaving them without a point.

Scorpions lost cheap wickets early on, but Fudadin held the innings together, posting 23 for the first wicket with Aldaine Thomas (12), 37 for the second with Jermaine Blackwood (7) and 21 for the third with Andre McCarthy (9).

However, when McCarthy edged a cut at off-spinner Terrance Warde and was taken at slip by Powell in the 22nd over, Scorpions were 81 for three and in need of a solid partnership.

They got it courtesy of Fudadin and Bonner who combined in a 133-run, fourth-wicket stand to put their side in a strong position.

Fudadin reached his fifty off 78 deliveries but stepped up his scoring to reach his second fifty off as many balls and complete a second List A hundred.

Bonner, meanwhile, was the more aggressive, lashing four fours and three sixes in an attractive innings.

Fudadin was eventually run out in the 45th over and Bonner followed in similar fashion in the final over, pinching a sharp single off the first ball in a failed attempt to get on strike.

In reply, Powell dominated from the outset, putting on 130 for the first wicket with Hodge who counted seven fours and a six in a 79-ball knock.

Powell scored briskly to reach his half-century off just 46 balls, and marched to three figures in the 41st over off 113 deliveries.

When Hodge eventually missed a straighter one-off Bonner’s leg-spin and was lbw in the 23rd over, Jangoo joined Powell to add 74 for the second and further consolidate Hurricanes’ position.

Jangoo faced 47 balls and struck three fours before driving a chest-high catch to cover off McCarthy’s off-spin, but Thomas arrived to put on 60 in an unbroken third-wicket stand with Powell, and hasten the end.