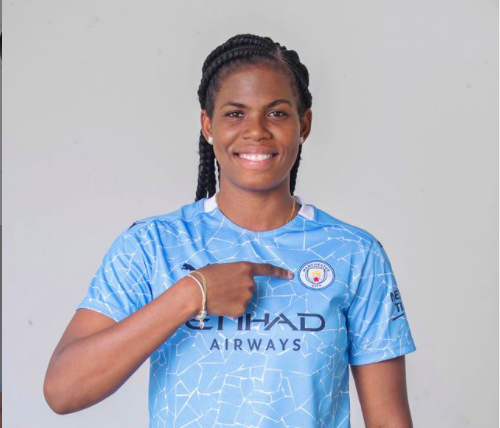 After a scoreless first half, Shaw put the reigning champions ahead in the 46th minute.

Vicky Losada of Spain doubled the lead in the 53rd minute with a swerving strike from range before limping off. In the 62nd minute, Shaw deflected Filippa Angeldahl’s effort.

England’s Alex Greenwood scored a penalty to make it 4-0 before the unmarked Shaw completed her first hat-trick in English football with a header in the 85th minute.

Sweden midfielder Angeldahl then scored from close range as Manchester City rebounded from a humiliating 5-0 loss to rivals Arsenal on Sunday.

Shaw expressed her delight at scoring her first City hat-trick.

“It’s a wonderful feeling,” she said with a smile. “It’s always a plus to score goals and contribute to the team. I’m here to assist the team in any way I can. I’m here to win trophies, and you must first and foremost win games.”

Khadija Shaw moved to the Academy Stadium in July on a three-year deal following the conclusion of her contract with Bordeaux. She ended the season as the league’s top goal-scorer, also winning the Golden Boot.

Manchester City’s victory earned them a home tie in the semi-finals against rivals Chelsea, who won 4-0 away at Birmingham City in their quarter-final game.

Arsenal, the league leaders, will host Brighton in the other semi-final.

Arsenal qualified with a 5-1 win over neighbours Tottenham, while Brighton advanced with a 1-0 win over the lowest-ranked side Charlton.

The semi-finals will take place on Sunday, October 31, with the final taking place on December 5 at Wembley Stadium.