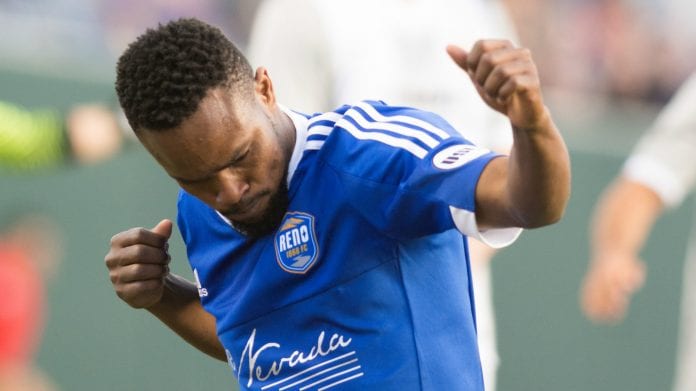 Jamaican Dane Kelly scored his 11th goal of the season but in a losing cause as Charlotte Independence suffered a shock 3-1 defeat to bottom dwellers Memphis 901 FC in the United Soccer League last weekend.

Playing at the Sportsplex at Matthews in North Carolina on Saturday night, the 29-year-old scored a first-half goal to put the hosts ahead but then watched as Memphis went 2-1 up at the break before adding a late second-half goal.

Both Charlotte and Birmingham have 25 points but Birmingham possesses a superior goal difference.

Kelly was on target in the 24th minute when he found himself unmarked in the box and nodded Jake Areman’s cross past goalkeeper Jimmy Hague from close range.

However, the tide turned quickly when Jose Baxter and Cal Jennings scored in the space of three minutes on the stroke of half-time, to hand Memphis the lead.

First, Guyana international Keanu Marsh-Brown set up Baxter for a superb volley from the edge of the 18-yard box in the 41st minute and just moments later, Trinidadian Leston Paul put through Jennings for a cool finish.

The scoreline held until the 86th minute when Jennings completed his brace courtesy of a brilliant solo effort off the left-wing.

In St Louis, another Jamaican Devon Williams netted his fourth goal of the season to earn Louisville FC a narrow 1-0 win over St Louis at the West Community Stadium.

The 28-year-old’s strike came in the two minutes before the break when he squeezed in Oscar Jiminez’s corner at the far post.

For Louisville, the victory was their fifth on the trot and carried them to 32 points to continue top of Group G, also confirming their place in the playoffs.

Trinidad and Tobago international Andre Fortune also found himself on the scoresheet with a franchise-leading fifth goal of the campaign to earn North Carolina their 2-1 win over Legion at BBVA Field in Birmingham.

The 24-year-old scored from the penalty spot in the 26th minute to double the advantage for the visitors after Manny Perez had opened the scoring in the seventh minute.

Jaden Servania’s 67th-minute strike added some interest to the contest but North Carolina saw out the game safely to move to 16 points with two games in hand on the leaders.