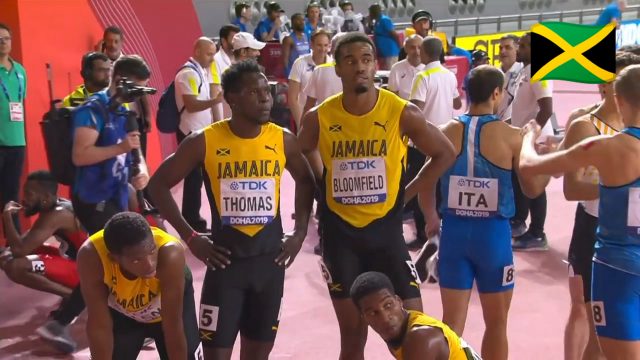 DOHA, Qatar, CMC – Jamaica’s 4×400 men and women’s relay teams copped silver and bronze respectively to bring the curtains down on the 2019 IAAF World Championships at Khalifa Stadium on Sunday.

The men’s team of Akeem Bloomfield, Nathon Allen, Terry Ricardo Thomas and Demis Gaye ran a season’s best time of 2:57.90 to finish second behind the United States who clocked a world-leading 2:56.69.

The result meant that Jamaica ended the meet ranking third on the medal table with 12 medals: three gold, five silver and four bronze. Kenya was ranked second with five gold and a total of 11 medals, while the United States had a leading number of 29 medals total.

While there was no doubt as to who claimed the top two spots in the women’s 4×400, there was some controversy surrounding Jamaica women’s third-placed finish and they were only awarded the bronze medal following a protest after initially being disqualified.

Jamaica’s quartet of Anastasia Le-Roy, Tiffany James, Stephenie Ann McPherson and Shericka Jackson crossed the line in third, but was disqualified for a changeover violation.

Great Britain, who originally finished fourth, was then bumped up to third.

However, the Jamaican team appealed the decision and the bronze medal was eventually reinstated.

Britain launched a counter appeal against Jamaica’s reinstatement, but after a period of uncertainty as to who would pick up the bronze medal, the appeal was dismissed.

Danielle Williams’ had earlier given Jamaica their 10th medal of the Championships when she finished third in the women’s 100 metre hurdles.

In other results, Jamaica’s Chanice Porter was eighth in the women’s long jump with a leap of 6.56 metres and Olympic gold medalist Keshorn Walcott was a disappointing 11th in the men’s javelin with a throw of 77.47.