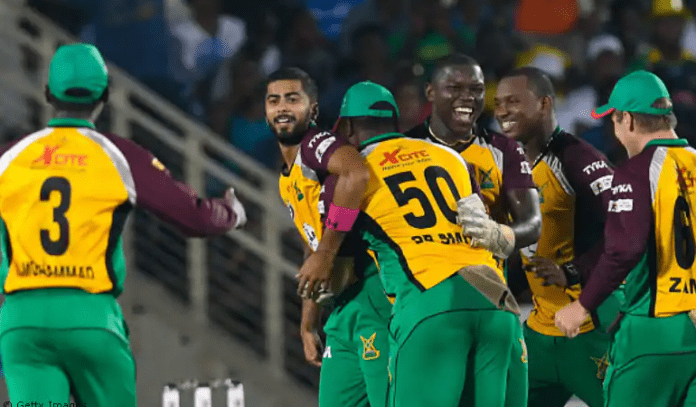 PROVIDENCE, Guyana, CMC – The Guyana Amazon Warriors predictably maintained their unbeaten streak, notching their 11th win in a comfortable 30-run victory over the Barbados Tridents to book their place in the final of the Caribbean Premier League (CPL).

Led by an outstanding unbeaten century from opener Brandon Knight, the Warriors posted a formidable 218 for three off their 20 overs.

Despite an encouraging start, the Tridents frequently lost wickets which helped to derail their chase and they eventually ended on 188 for eight in their allotted 20 overs.

The 24-year-old King lit up the afternoon sky with breathtaking shot selection during his knock of 132, the highest individual score in CPL history.

Firstly, he shared an opening stand of 73 in nine overs with Chandrapaul Hemraj which served as a launchpad for the rest of the innings.

King showed his intentions early on, smashing 18 runs off Jason Holder’s second over after a relatively slow start for the Warriors.

It took a spectacular return catch from Hayden Walsh Jr running back to break the partnership by dismissing Hemraj for 27 from 23 balls.

Shimron Hetmyer’s stay at the crease didn’t last long as he was out once again to a short delivery, pulling Jason Holder into the hands of Raymon Reifer on the boundary after scoring three runs.

Former Trident Shoab Malik then joined King at the crease and together they completely tore their opponent’s bowling apart.

The 16th over proved to be the turning point of the innings with the duo unleashing their fury on spinner Shakib Al Hasan.

Two Malik sixes off the first two balls were followed by a four and two sixes by King, as they took 29 runs from the over.

Soon after, King brought up his maiden CPL century by clouting Reifer over the midwicket boundary for six.

Walsh Jr, the Trident’s best bowler, wasn’t spared either as King smacked him for three sixes in the 19th over that went for 19 runs.

Harry Gurney, who had bowled well leading up to his final over was then belted around the ground in the 20th over, as King clobbered him for two sixes and a four in an expensive over that went for 26 runs.

By the time the innings was over, King had counted a remarkable 11 sixes and 10 fours in his 72 ball knock, as the Warriors posted the highest-ever T20 total at the ground.

Needing a Herculean effort to upset the home side, Johnson Charles and Alex Hales gave the Tridents an encouraging start.

They had added 32 when Imran Tahir accounted for Charles’ wicket, with two more wickets following soon after.

Hales and Al Hasan lost their wickets within two runs of each other as the Tridents slumped to 59 for three in the eighth over.

Jonathan Carter and skipper Holder led a brief revival, adding 47 runs in three overs to give the Tridents a possible chance of a comeback victory.

But once Carter was out for the topscore of 49 in the 17th over with 68 runs still needed, the visitors’ hopes disappeared.

Warriors’ best bowler was Romario Shepherd who took 3-50 from his four overs, while Imran Tahir and Odean Smith both captured two wickets.

The Tridents will now face the Knight Riders in the semifinal, with the winner advancing to face the unbeaten Warriors.