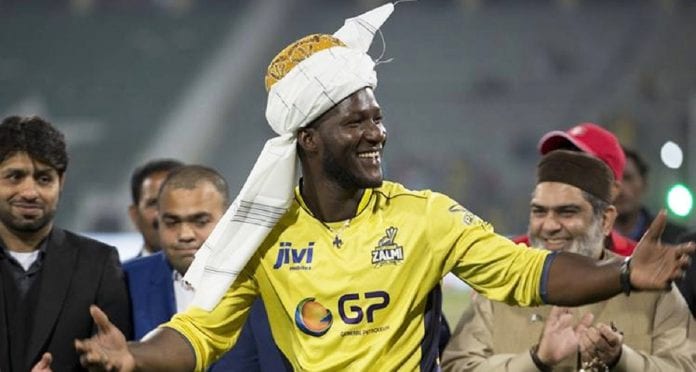 ISLAMABAD, Pakistan, CMC – Former West Indies captain Darren Sammy is to become an honorary citizen of Pakistan and will also receive the country’s highest civilian award, the Pakistan Cricket Board (PCB) has announced.

In a post on Twitter, the PCB said Pakistan’s President Arif Alvi will confer the Nishan-e-Pakistan award on the 36-year-old St Lucian on March 23, for his “invaluable contribution to cricket” in the South Asian nation.

Sammy will be the first cricketer to receive the honour.

The former Windies skipper had been among the first foreigners to agree to tour Pakistan when the Pakistan Cricket Board (PCB) sought to bring the Pakistan Super League (PSL) final to the country in 2017, eight years after a deadly attack on the Sri Lankan team bus outside the Gaddafi Stadium in Lahore caused the country to be blacklisted as an international cricket venue.

Sammy is currently in Pakistan participating in the PSL as captain of the Peshawar Zalmi which he has represented from the inception of the tournament.

The team’s owner Javed Afridi, who described Sammy as “the most loved and cheered foreign cricketer in Pakistan”, said the franchise had put in a formal request to President Alvi for the honorary citizenship for the allrounder.

“You have won the hearts of millions of Pakistanis not only by your game but also by your stand for Pakistan when you came here in difficult times in 2017. We will always remember it,” tweeted the Minister of State for Parliamentary Affairs.

Sammy, meantime, said that whatever he did for Pakistan was not for any personal gain.

“My love for Pakistan is natural, my contribution to this country is pure. I don’t need a passport to show my love for this country. All the players who have supported this step have contributed to where we are today. It is good that it has been recognized, but I didn’t do it for myself it is for my affection with the people and for the love I get from here,” he said.