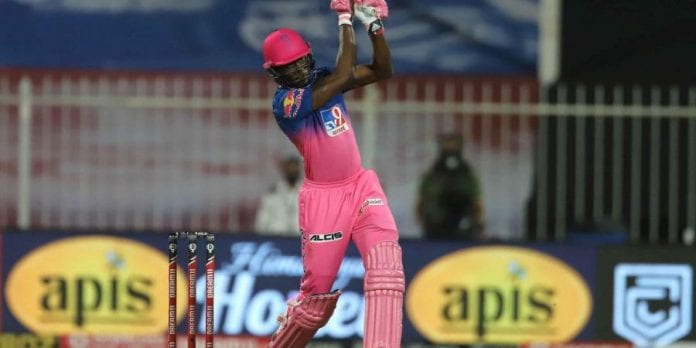 West Indies fast bowler Sheldon Cottrell gave up 30 runs in a critical 18th over before Barbados-born England star Jofra Archer lashed two of three sixes in a penultimate over which gushed 19 runs, as Rajasthan Royals pulled off an Indian Premier League record run chase of 224 to stun Kings XI Punjab by four wickets in the UAE on Sunday.

With Royals requiring 51 from the last three overs, Rahul Tewatia, who made 53 from 31 deliveries, slammed five amazing sixes in Cottrell’s third over, to swing the game in his side’s favour.

However, the momentum shifted when Royals lost Robin Uthappa for nine to the first ball of the 19th over, lofting seamer Mohammed Shami down the throat of West Indies star Nicholas Pooran at long-off.

But Archer (13 not out) then lashed back-to-back sixes from the next two deliveries and Tewatia slammed the fifth ball for the third six of the over, to leave Royal with just two runs for victory off the final over.

And even though Tewatia fell to the final ball of the over and Riyan Parag was bowled off the second ball of the final over by off-spinner Ravi Ashwin, Royals completed victory with three balls to spare to cap a magnificent contest at the Sharjah Cricket Stadium.

The run chase was set up by Sanju Samson who top-scored with a superb 85 off 42 deliveries, the second consecutive half-century for the 25-year-old right-hander.

He belted four fours and seven sixes and anchored two crucial stands – 71 for the second wicket with Australian Steven Smith who made 50 from 27 balls with seven fours and a pair of sixes, and a further 61 for the third wicket with Tewatia.

Tewatia then blasted seven sixes in a knock to dominate a 42-run stand with Uthappa before Archer arrived at the start of the penultimate over to add the finishing touches.

Cottrell, who claimed the first wicket of Englishman Jos Buttler for four in the third over, finished with one for 52 from his three overs.

Earlier, the left-handed Pooran smashed an eight-ball unbeaten 25 with a four and three sixes at the death as Kings XI piled up 223 for two after they were sent in.

However, it was opener Mayank Agarwal’s 106 off just 50 balls with 10 fours and seven sixes, which propelled Kings XI.

Agarwal put on 183 for the first wicket with captain KL Rahul who scored 69 off 54 deliveries before Pooran plundered 18 runs from the last over sent down by speedster Archer.