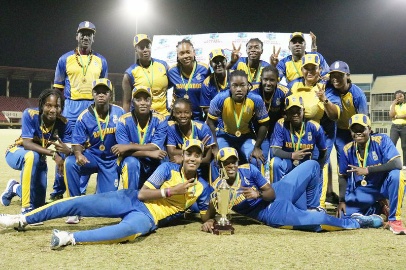 A Caribbean nation will claim one of the last two spots in the historic Twenty20 tournament when women’s cricket debuts at next year’s edition of the Commonwealth Games in Birmingham.

With West Indies unable to compete as one entity, this year’s T20 Blaze – the Cricket West Indies women’s domestic championship – will determine the country which joins several global powerhouses at the July 28 to August 8 Games.

“As per the qualification process, the winner of a designated Qualifying event will determine which country from the Caribbean region gets to participate as athletes will be representing their individual countries and not the West Indies as they would at ICC events,” the International Cricket Council said in a statement Monday.

CWI last hosted the T20 Blaze in 2019 when Barbados emerged winners in the tournament staged in Guyana.

The ongoing COVID-19 pandemic wiped out all domestic women’s cricket in the Caribbean last year and has continued to keep a question mark over the hosting of the T20 Blaze this year.

England, meanwhile, have qualified for the eight-team tournament by virtue of being hosts, while Australia, India, New Zealand, Pakistan and South Africa all booked their spots courtesy of their current standing in the International Cricket Council Women’s T20 International rankings.

The ICC said the last spot in the Commonwealth Games tournament would be determined by another qualifying tournament scheduled to be staged before January 31 next year.

“We are incredibly proud and excited to be part of Birmingham 2022 and it is a fantastic opportunity for us to continue to grow the women’s game globally,” said the acting ICC chief executive, Geoff Allardice.

“We are committed to maintaining the momentum that saw 86,174 fans packed into the Melbourne Cricket Ground for the final of the ICC Women’s T20 World Cup last year and Birmingham 2022 gives us another global stage on which to showcase the women’s game.”

The tournament marks only the second time cricket will be played at the Commonwealth Games, the last occasion being 23 years ago when a men’s 50-overs tournament was played at the multi-discipline showpiece held in Malaysia.

Jamaica, Antigua and Barbados represented the Caribbean but none reached the knock-out stage.

“Cricket is a sport that is synonymous with the Commonwealth and we are so excited to have it back in the Games for the first time since the men’s competition at Kuala Lumpur 1998,” Dame Louise said.

“The debut of women’s T20 cricket will be a historic moment for Commonwealth Sport and a wonderful showcase for women’s sport across the world.”

The Commonwealth Games will feature 4,500 athletes from 72 countries.