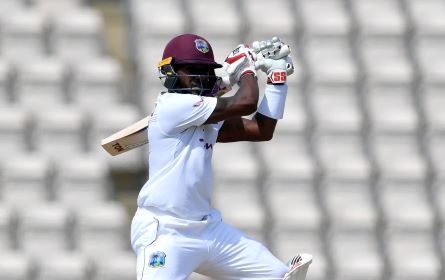 MANCHESTER, England – Jermaine Blackwood struck a half-century but perished in the final over before tea as West Indies hopes of staving off defeat in the second Test suffered another blow on Monday.

At the interval on the final day of the Old Trafford contest, the Caribbean side were struggling on 137 for five, needing to survive one session in order to force a draw and retain the Wisden Trophy.

Blackwood struck an attractive 55 while Shamarh Brooks carved out an unbeaten 52, the pair putting on a crucial 100-run stand for the fifth wicket to pull West Indies around from 25 for three at lunch.

However, with three balls left until tea, Blackwood fended off a short ball from seamer Ben Stokes for wicketkeeper Jos Buttler to run around and take a low leg side catch.

The right-hander hit seven fours in a fluent 88-ball innings.

Brooks, meanwhile, has counted three fours and two sixes off 96 deliveries, to mark his second half-century of the game.

Set 312 for victory after England declared their second innings on 129 for three, West Indies had their top order wiped out by a devastating spell from veteran seamer Stuart Broad (3-250.

John Campbell (4) nicked the fifth ball of the innings from Broad and was given out caught behind on review and opening partner Kraigg Brathwaite (12) followed, lbw to seamer Chris Woakes with the score on 19.

And Shai Hope then continued his wretched run when he was bowled comprehensively by Broad for seven.