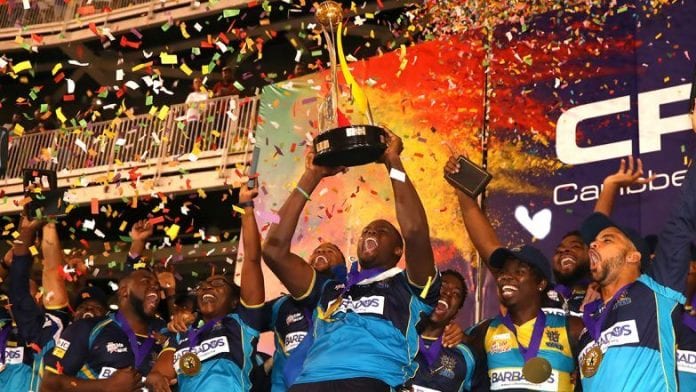 In a one-sided final at the Brian Lara Stadium, Tridents dealt Amazon Warriors their first loss of the entire campaign, to cap a fairytale run which saw them win just two of their first six matches in the preliminary but rebound to capture three of their last four and finish second in the standings.

For Amazon Warriors, the defeat was their fourth in as many trips to the final, extending a luckless if not maddening record and their frustrating wait for a CPL title.

Having won 11 games on the trot, they chose the wrong time to play their worst cricket and paid dearly in the end.

Choosing to bat first, Tridents rallied to 171 for six thanks mainly to veteran left-hander Jonathan Carter’s unbeaten 50 off 27 balls.

Opener Johnson Charles, the Tridents’ leading scorer this season, struck 39 off 22 balls while Englishman Alex Hales chipped in with 28 off 24 deliveries.

Tridents were stalling at 126 for six at the end of the 17th over but Carter, who belted four fours and sixes in a Man-of-the-Match performance, helped his side gather 45 runs from the last three overs.

Amazon Warriors then suffered an uncharacteristic batting meltdown and muffed what should have been a straightforward run chase in ideal conditions, stumbling to 144 for nine off their allotted overs.

Not for the first time, the tournament’s leading run-scorer Brandon King top-scored with 43 off 33 balls while all-rounder Keemo Paul (25) and Nicholas Pooran (24) got starts but failed to carry on, leaving Amazon Warriors with an uphill task.

In fact, they were stuttering along at 60 for three at the end of the ninth over, scoring at a run rate of just over 6-½ per over and forcing the asking rate beyond 10.

The pressure eventually told and they lost six wickets for 60 runs in a collapse which swung the pendulum firmly in Tridents’ favour.

The start for Tridents was vital, Charles belting six fours and a six to inspire a 43-run opening stand with Hales who counted two fours and sixes before top-edging a skier to King at mid-wicket off fast bowler Romario Shepherd in the sixth over.

His dismissal sparked a collapse that saw Tridents lose six wickets for 65 runs to totter on 108 for six in the 15th over. Carter came to his side’s rescue, however, putting on 63 in an unbroken seventh-wicket stand with Nurse who blasted a four and a six in an unbeaten 19.

Handed the new ball, Reifer struck to key blows upfront, removing Chandrapaul Hemraj for one to a catch at short third man in the second over and then claiming the prized wicket of Shimron Hetmyer for nine, the left-hander miscuing a pull to mid-on in the fourth over.

When captain Shoaib Malik (4) pulled a Hayden Walsh long hop to Reifer at deep mid-wicket in the eighth over, Amazon Warriors were in need of a special effort to kickstart the innings.

King did his part, crunching four fours and a six in a 26-run, fourth-wicket partnership with Pooran but his departure via a deft leg-side stumping by Shai Hope off Nurse at the end of the 11th, set Amazon Warriors back again.

Left-hander Pooran struck two fours and a six in a patient 25-ball knock and while he remained there, Amazon Warriors kept alive their hopes.

However, Nurse sounded the death knell when he got Pooran to mistime a catch to long-on in the 15th over as Tridents closed in for the win.