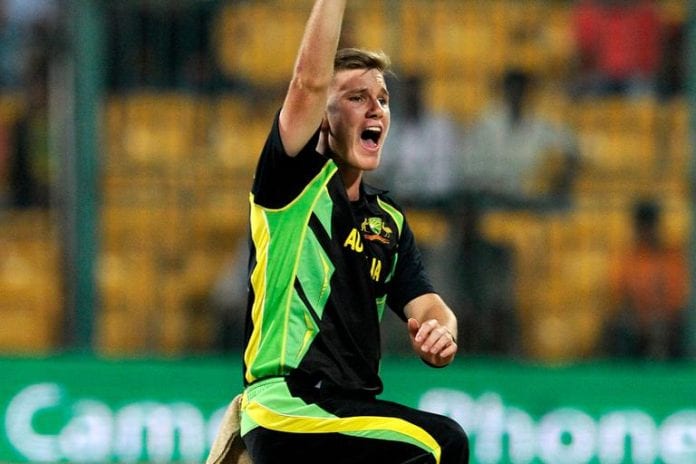 Australia’s Zampa aiming to stamp his mark on CPL 2016

Rising leg-spinner aiming for strong showing after “whirlwind” rise in recent months  Click HERE to download the exclusive CPL audio interview
Guyana Amazon Warriors leg-spinner Adam Zampa is excited about playing in his debut Hero Caribbean Premier League (CPL) campaign, and believes that it will be a great learning curve for him as he tests himself in the Caribbean and Florida this summer.
In an exclusive interview with www.cplt20.com, which is available for free download and editorial use, Zampa also outlined his hopes for his debut CPL season as well as his thoughts on the CPL’s plans to play matches in Lauderhill, Florida.
The 24-year-old New South Wales star, who has featured in six T20 internationals to date since making his debut against South Africa in Durban in March, has claimed five wickets.
After a strong Big Bash League with Melbourne Stars, he made his ODI debut against New Zealand in February and carried on his form into the ICC World T20 for his country. He was a standout performer for Rising Pune Supergiants in the recent IPL where he impressed players and pundits alike with the variety and control of his attacking and defensive displays under pressure, claiming 12 wickets in five matches. His best bowling figures of 6 wickets for 19 runs came against Sunrisers Hyderabad.
Currently on ODI duty with the Australia squad in the West Indies as part of the Tri-Series, which also includes South Africa, Zampa took time to look ahead to his forthcoming CPL stint with the Warriors.
On his excitement about making his CPL debut: “I’m very excited (to play CPL). I’ve watch a bit of it on TV and, growing up and watching a lot of cricket in the West Indies, it looks like a lot of fun. I’m looking forward to (playing) in the biggest party in world cricket. It’s going to be a great tournament, playing against great players, but obviously it looks like a fun tournament too.”
On his progression over the last six months from Big Bash through to the ICC World T20 and into IPL: “The IPL was a good learning curve, conditions wise, particularly in terms of what I’m going to coming up with here in the Tri-Series and then into CPL. Playing tournament-style cricket has been a really good experience. The last six months, with the Australian team too, has been a bit of a whirlwind. I’ve played in a few Twenty20 tournaments now, including BBL (Big Bash League) and they’re very similar in that if you’re not having a successful tournament they can get quite hard. The drive to do well and do well for the team does make a big difference. I think that if you do have some success, the tournament does seem a lot easier than if you are losing.”
On his hopes for the Guyana Amazon Warriors: “I’m hoping for some team success. In this year’s tournament you’ve probably got more higher class international players than I’ve ever seen before so to get that type of exposure against those players, I want to have some team success too.”
On his Guyana Amazon Warriors team-mates: “There’s plenty of power up front, that’s for sure! The way that Dwayne Smith has played in the IPL recently, obviously Chris Lynn in Twenty20 can hit the ball a long way, and (Martin) Guptill has had some success in that format as well. I don’t know a lot of the squad at this stage, but I know Sohail Tanvir is a quality player as well.”
On the CPL’s move to the USA: “I hope it does (take off), because I’ve just come back from a few days in New York with the Australian team and we had a great time there. We got to walk the streets and get to see a little bit of what the USA is like. It’s a wonderful country, probably my favourite place to go now, and if cricket was to take off there it would really make a great difference to us as players. I’m really looking forward to Florida. That’s for sure! I think that cricket is something that the US people can get used to. They enjoy baseball, and although it might take some time for Twenty20 cricket, but if they can sit down and watch it and appreciate it then I guess you never know. It might be tough, but I think there’s similarities for sure. I didn’t find baseball too exciting, but when I watch Twenty20 cricket, it might be a little bit different. But I think there’s something there.”
*Tickets for CPL fixtures in the Caribbean and Fort Lauderdale are on sale now from www.cplt20.com.
Guyana Amazon Warriors Home Fixtures (all times local): 7 July – Jamaica Tallawahs (7pm), 9 July – St. Kitts & Nevis Patriots (12 Midday), 10 July – Trinbago Knight Riders (7pm), 12 July – St. Lucia Zouks (7pm).
Guyana Amazon Warriors Squad: Sohail Tanvir, Martin Guptill (captain), Dwayne Smith, Chris Lynn, Rayad Emrit, Adam Zampa, Jason Mohammed, Christopher Barnwell, Veerasammy Permaul, Orlando Peters, Assad Fudadin, Anthony Bramble, Paul Wintz, Steven Jacobs, Steven Katwaroo, Ali Khan, Shimron Hetmyer