Another gold for swimmer Alia Atkinson 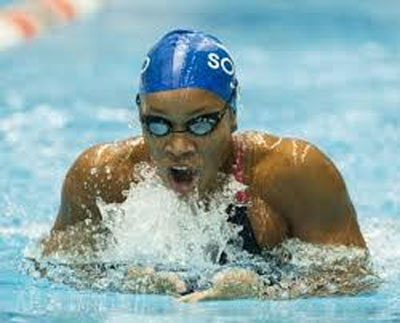 Atkinson sped to 29.42 seconds touching the wall almost a second in front of Rikke Pedersen of Denmark 30.32 and Austria’s Lena Kreundl 31.24 seconds.

Atkinson later completed her campaign in Doha, with a second place finish in the 200m breaststroke in a time of 2 minutes, 26.10 seconds.

Danish champion Pedersen won the gold in 2 minutes, 18.66 seconds, while Lisa Zaiser of Austria took the bronze in 2 minutes, 28.55 seconds.

Atkinson, who ended the second cluster of the FINA Short Course World Cup with two gold and one silver medal, returns to South Florida Aquatics to resume training for the third cluster which begins in Beijing, China on November 10.

On September 30, Atkinson also won a gold medal at the 2017 FINA/airweave Swimming World Cup in Hong Kong. She won  the women’s 100-meter breaststroke in 1:04:09, ahead of  second-place winner Rikke Pederson of Denmark and third-place winner Kierra Smith of Canada.

Alia Atkinson, 29, is a multi-Olympian and breaststroke specialist. She Atkinson competed in her first Olympics at just 16 years old and competes in her fourth Olympic Games in Rio in 2016.

Atkinson takes her role in Jamaican swimming very seriously, and even has a mission statement to her swimming career: “To place Jamaica on the world map of swimming; to agitate for the improvement of the infrastructural support for swimming in Jamaica so as to be able to take it to the next level; and to realize my full potential for myself, my parents, and my country.”