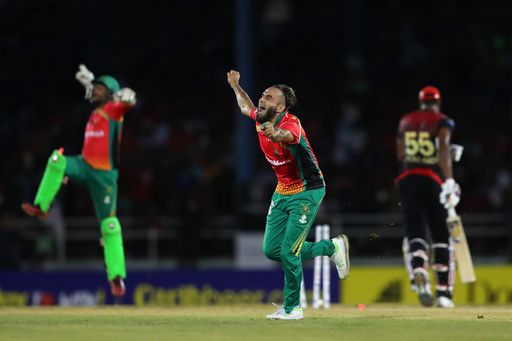 PORT OF SPAIN, Trinidad, CMC – Guyana Amazon Warriors held their nerve in the closing stages of an onslaught to outlast defending champions Trinbago Knight Riders by 19 runs and clinch an unprecedented, eighth straight victory in the Caribbean Premier League (CPL) on Monday.

The Amazon Warriors looked to be making a gallant defense of a target of 186 when they reduced TKR to 53 for four in the ninth over, but Pollard stepped in to slam an explosive 71 from 38 balls and Bravo was unbeaten on 58 from 46 balls that revived the home team’s chances.

Pollard, the new West Indies white-ball captain, and veteran Windies batsman Bravo shared 112 for the fifth wicket before running out of steam in a tense finish at the Queen’s Park Oval.

With 37 required from the last 12 balls, Windies pacer Keemo Paul conceded a boundary from the first ball of the 19th over before restricting Bravo and Pollard to a string of single for the remaining five balls of the over.

Former South Africa leg-spinner Imran Tahir followed up with a skillful final over, conceding eight from the first three deliveries – including a six to the left-handed Bravo over wide long-on – before he bowled Pollard with the fourth ball of the over and closed the game with a single and a dot-ball.

The victory meant Amazon Warriors kept their clean sheet and set a CPL record for the number of consecutive victories in the tournament.

TKR faces the visiting Barbados Tridents on Wednesday, needing to clinch a victory or else leave their hopes of qualification for the Final in the hands of other teams.