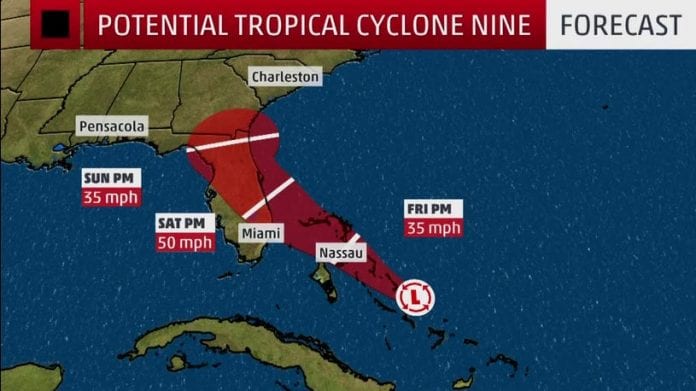 NASSAU, Bahamas – As the Bahamas still reels from the effects of deadly Hurricane Dorian that passed over the island last week, a new storm warning has been issued for the archipelago.

The US National Hurricane Center says “potential tropical cyclone nine” is expected to form in the coming hours near the northwestern Bahamas. The system is emerging about 235 miles (380 kilometres) southeast of Great Abaco Island. The disturbance has maximum sustained winds of 30 mph (45 kph) and is moving to the northwest at 8 mph (13 kph).

The Bahamian government issued the tropical storm warning for several islands including the Berry Islands, Bimini, Eleuthera, New Providence, and the islands that were already severely damaged by Dorian: Abacos and Grand Bahama.

Forecasters say the system could become a tropical storm named Humberto within the next day or so. Heavy winds and rain are expected within the northwest Bahamas by late Friday, except for Andros Island.

The hurricane centre says people on Florida’s east coast should monitor the progress of the storm system as well.

“The system is expected to produce total rain accumulations of 2 to 4 inches through Sunday over the Bahamas and along the east coast of Florida north of West Palm Beach,” the National Hurricane Center said. “Isolated maximum amounts of 7 inches are possible in the northwest and Central Bahamas.”

The rain and wind in South Florida is expected to start overnight Friday into Saturday and last through Saturday, said forecasters with the National Weather Service forecast office in Miami.