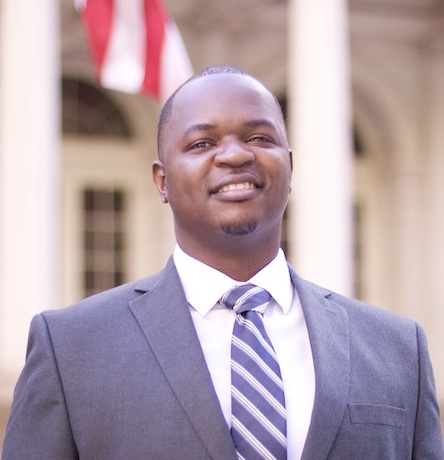 “Last year, a new era dawned in Albany with the defeat of the IDC (Independent Democratic Caucus), the Republicans, and do-nothing Democrats who cozy up to real estate and special interests instead of speaking out for their constituents,” said Josue “Josh” Pierre as he declared his candidacy for the district that is currently represented by African American New York Senator Kevin Parker.

“As an immigrant and a member of the LGBTQ (Lesbian, Gay, Bisexual, Transgender, and Queer) community, I’ve seen first-hand the progress we’ve made. But our fight for affordable housing, fully-funded public schools, and access to healthcare is not over.

“That’s why I’m running for State Senate: to fight for our values and deliver the change we need,” said Pierre, who migrated with his family from Haiti when he was five-years-old.

He said he has lived in the 21st District since migration, attended public schools and graduated from Baruch College, City University of New York, with a degree in accounting.

Pierre most recently served as the Brooklyn Borough Director for New York City Comptroller Scott Stringer, where he led a team to connect Brooklyn residents with government resources and services.

He has also served as a Democratic District Leader for the 42nd Assembly District since 2016, which is represented by Haitian American New York State Assemblywoman Rodneyse Bichotte, the daughter of Haitian immigrants.

In addition, Pierre is a founding member of the Brooklyn-based Shirley Chisholm Democratic Club that is named after the late Caribbean American congresswoman, the first Black woman to seek the Democratic Party’s nomination for the US Presidency.

Shirley Anita Chisholm who died in 2005, was the daughter of Barbadian and Guyanese immigrants.

In 1968, she became the first Black woman elected to the United States House of Representatives, representing the then 12th Congressional District in Brooklyn for seven terms, from 1969 to 1983.

Pierre did not address the issue of proliferation of Haitian Americans or Haitian-born candidates seeking elective offices in New York.

Instead, he focused his attention on what he described as “special interests” domination of politics in the State’s capital, Albany, stating that “special interests” will continue to do so, “until we elect leadership that listens to people instead of corporations.”

“That’s why I’m pledging not to take a cent from special interests or corporate PACs (Political Action Committees) from day one,” he said.

PAC is a popular term for a political committee organized for the purpose of raising and spending money to elect and defeat political candidates.

“Ever since I came to America, I’ve seen the power of our communities and government coming together. Now, more than ever, we need our elected representatives to protect our seniors, our children and our livelihoods. I am ready to be that fighter,” Pierre added.