The event was a fabulous affair, elegantly decorated in the colors of Trinidad and Tobago (red, black and white) and depicted the theme “Bring Back Di Old Time Days.”

Guest speaker, the Honorable Camille Robinson-Regis, TNT’s Minister of Planning and Development, spoke eloquently about cherishing Trinidadian culture. She took everyone down memory lane, reflecting on growing up in the twin islands where it “took a village to raise us,” on stand-pipe drinking water, street-light curfews, cocoa blocks to make hot chocolate, listening to folklore tales and the cocoyea broom that “sweeps cleaner than any hoover vacuum.”

Prior to dinner —  which was a fabulous braised chicken and salmon in a plum sauce, served with the usual dramatic Signature Grand flair — the crowd was treated to cultural performances of Indo-Caribbean Dancer, Ilicia Dow of Jayadevi Arts, Inc. She performed beautifully to Don’t Fall in Love, Pholouri Bina Chutney, and Surajie My Darling.

The Peter London Global Dance Company out of Little Haiti Cultural Dance Complex, the premier professional multi-cultural dance company, men (in red and white) performed “Shango”. This was followed by two works of “Kaiso Bacchanal” performed to the Mighty Sparrow’s Jean and Dinah, and Lord Kitchener’s Pan in A Minor.

Gate prize tickets for two on Caribbean Airlines were presented by Kaye Chong. A copy of the book, Caribbean Heritage History Archives, was donated by Elliot Bastien and Sandra Bernard-Bastien, as well as a gift basket of Grace, Kennedy products. 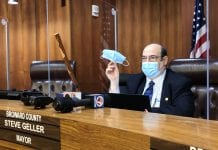 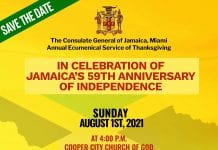