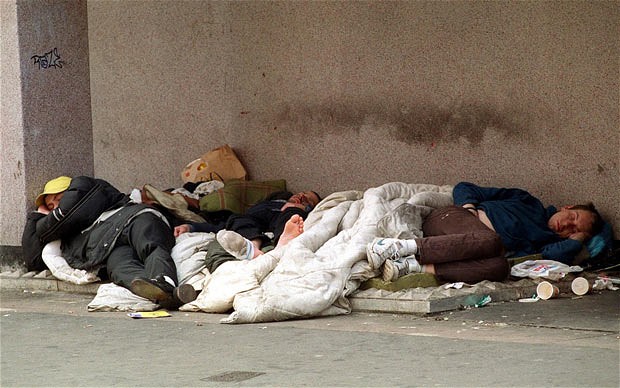 By Dr. Garth A. Rose

The face of homeless – too many thought – use to be clear: the addicted the mentally ill. And though the issue remains chronic among the most vulnerable of society, uncertain economic times have transformed its reality, as reports show a diverse number of South Floridians are homeless or exist on the brink.

“We in the community should pay more attention, as so many people are close to being homeless,” says advocate Travis Paulson. “It’s not just a cliché, but a lot of us are a pay-check away.”

Paulson’s connection to the cause is personal. In 2009, Paulson experienced what it was like when he lost his IT job and couldn’t pay rent. He spent four nights in a Miami Salvation Army shelter before a relative allowed him to “kotch on her family-room sofa.”

The experience was “the most humiliating period of my 32-years,” remembers Paulson. “I had to leave the shelter at day-break, wander the streets all day, return late evening, join a line, not even sure if I would get a bed for the night. Luckily I did for those four nights.”

During his time there, he was also “surprised by how many other Caribbean migrants were in the shelter. These were men who had ambition, but lost their jobs and had no other source of income.”

Paulson was able to land another job four months later, but had always continued his advocacy, because “Caribbean-Americans aren’t involved enough in structured organizations to alleviate this plight.”

“Participation in food drives at Thanksgiving and Christmas is appreciated, but the perils of homelessness cannot be solved by providing food two times a year,” argues Paulson. “The roots and implications of homelessness goes deep. There’s need for greater community support within and outside the Caribbean-American community to solve this.”

But some changes may be on the horizon. Though frustrated by recent incidents in Fort Lauderdale and Miami, where city boards block civilians offering food and supplies in certain area, Paulson notes that some developments have been positive, particularly Miami’s Lazarus Project, a volunteer program that Camillus House initiated last year to treat homeless individuals with mental illnesses who refuse to enter shelters or seek institutionalized medical services. Paulson volunteered with doctors, nurses and social workers to provide medication and support.

Next October, Miami-Dade County’s Homeless Trust will make a $635,000 grant to Camillus House to expand its program, while the Miami Coalition for the Homeless will contribute an additional $350,000.

Camillus House CEO Shed Brown refers to the expansion plans as “a game-changer” for the county.

Encouraging more Caribbean-Americans to be advocates against homelessness, Paulson recommended membership in HOPE South Florida, a Fort Lauderdale organization formed in 2010 through a collaboration of several churches.

“HOPE is doing a tremendous service to help those in our community,” says Paulson. “Here’s a wonderful opportunity for more Caribbean-Americans to be involved.”