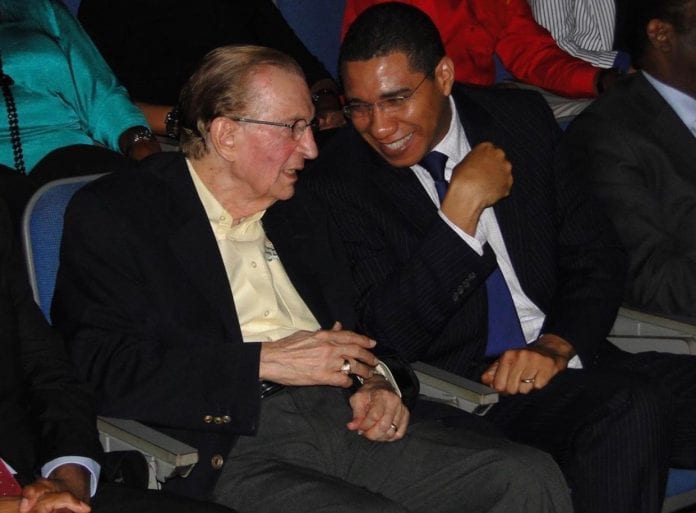 Jamaica’s Prime Minister Andrew Holness says former Prime Minister Edward Seaga remains in positive spirits as he continues to be closely supervised by a team of doctors at a hospital in Miami, Florida.

Holness who visited Seaga, 88, on Wednesday, accompanied by Minister of Culture and Entertainment Olivia Grange  said the former Prime Minister  expressed deep gratitude and love for the Jamaican people.

“I assured our former Prime Minister that Jamaica is in a good place and that our economic recovery is being carefully managed to ensure social equity and prosperity for the working-class masses of the Jamaican people. I also passed on to him, the many expressions of concern, love, prayers and good wishes for him from the Jamaican people and from his former constituency of West Kingston.

Among many other national and personal matters about which we spoke, Seaga enquired of football, which became a passion for him in later life.

Seaga, who will celebrate his 89th birthday later this month, is battling two chronic illnesses and complications associated with them.

Holness said,  “At the end of the visit, Mr, Seaga, Minister Grange and I all held hands and prayed with Mr Seaga for his improvement. He thanked us for lifting his spirit by visiting him and expressed his deep gratitude and love for the Jamaican people whom he served all his life.”

The Prime Minister added that Seaga’s family is “touched by and thankful for the outpouring of love and support from the Jamaican people. They ask that we continue to hold up ‘Papa Eddie’ in our prayers.”

It’s reported that Seaga, who served as prime minister from 1980-89 and became ill while travelling overseas.

Since his retirement from politics he has been an honorary distinguished fellow at the professorial level at The University of the West Indies, and also serves as chancellor of the University of Technology, Jamaica.