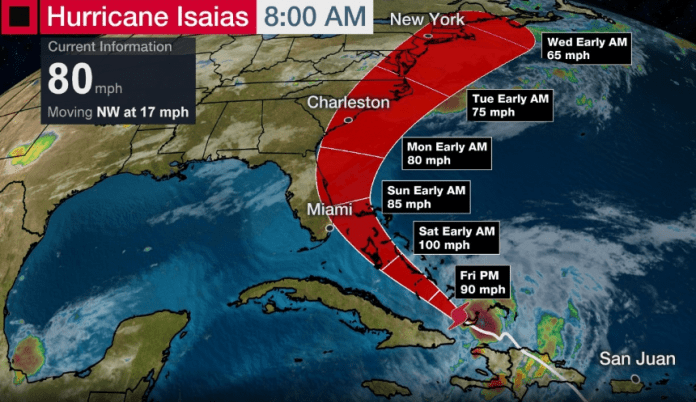 (via weather.com) Hurricane Isaias (ees-ah-EE-ahs) will track through the Bahamas into Saturday and near Florida this weekend, before tracking up the East Coast as far north as New England next week.

Isaias became a hurricane following an investigative flight by the Hurricane Hunters late Thursday, which found winds of 80 mph. Isaias remains a Category 1 hurricane, on the Saffir-Simpson Hurricane Wind Scale.

Tropical storm watches are in effect for parts of the Florida Peninsula, including Miami, Fort Lauderdale and West Palm Beach. A watch means tropical storm conditions are possible Saturday and Saturday night.

Hurricane warnings have been issued for the Bahamas, including Nassau, Freeport and the Abacos Islands, where hurricane conditions are expected into Saturday.

Tropical storm warnings remain in effect for the Dominican Republic. A warning means tropical storm conditions are either expected or are already occurring.

Bands of heavy rain also remain in parts of Hispaniola, particularly over the Dominican Republic.

Heavy rain triggered serious flash flooding in several areas of Puerto Rico. Just under 4.5 inches of rainfall was measured in San Juan on Thursday. Multiple fallen trees, mudslides and flooding was reported in southwest Puerto Rico, according to local emergency management. River flooding has been recorded by USGS gauges in several locations in Puerto Rico.

The NHC projected path below shows that this system could be located near or east of the Florida Peninsula by this weekend. Isaias will then gradually move northeastward near the East Coast.