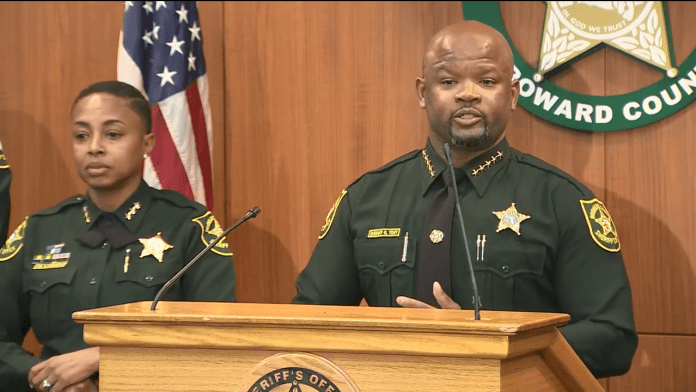 BROWARD COUNTY – In what some Broward residents refer to as  “unusually courageous, and fair” action Broward County Sheriff Gregory Tony overruled the original finding of Broward County’s Professional Standards Committee and fired a deputy sheriff who was seen on video back in April pounding black teen student Delucca Rolle’s head into the concrete pavement.

The cell-phone of the video which trended on social media, and shown on local news channel in April showed Krickovich accosting the teen, knocking to the ground, straddling him and sitting on his back, and repeatedly pounding the teen’s head into the concrete pavement. The incident took place on April 18 outside a MacDonald’s restaurant in Tamarac, near the J.P. Taravella High school where the teen attended, in front of some 200 students anticipating a fight between other students,

The incident drew huge public outcry, and accusations of unnecessary police brutality against Krickovich, and two other deputies who were also involved in the incident.

Caribbean-American teen, Nicola Nicholas who was among the students witnessing the assault said she was unable to sleep “for several nights” after the event and it caused her to develop “an uncanny fear of law enforcement officers.”

Following the incident, Krickovich was suspended without pay with Sheriff Tony vowing accountability. Misdemeanor charges were also brought against Krickovich and the two other deputies involved.

Broward County’s Professional Standards Committee investigated the incident and the circumstances relating to it, and the 11-member body unanimously recommended no discipline for Krickovich.

However, despite the committee’s ruling, Sheriff Tony decided to conduct a BSO internal review and disciplinary hearing. At the completion of this procedure, the decision was taken to fire Krickovich.

At Wednesday’s press conference Sheriff Tony said, he disagreed with the committee’s findings after investigating the same material the committee had investigated. He described that Deputy Christopher Krickovich’s actions back in April as “unreasonable and unnecessary”, and the deputy sheriff was terminated as “We don’t have a policy that allows a deputy to slam someone’s head into the ground.”

Brian Nicholas, father of Nicola Nicholas, said. “I am flabbergasted at Sheriff Tony’s decision. Most times the decisions taken in cases of police abuse, especially where minority victims are involved, is in the favor of the police.”

But not all the social media response was favorable. Some tweets called the dismissal “unnecessary”, “bias” and “overly authoritative.”

The union, the BSO Deputy Association, representing the deputy sheriffs expressed disagreement with the deputy sheriff’s firing. A representative for the union called the actions taken by Krickovich in taking down Rolle was “appropriate.”

After the April incident, the deputies defended their actions, saying they had to act quickly to take control of an unruly crowd of students. They had one teen pinned on the ground when Rolle, of North Lauderdale, reached for a boy’s cellphone on the ground, and he was reprimanded.

On Wednesday night, Rolle’’ mother, and other relatives publicly expressed relief at the action taken against Krickovich and praised Sheriff Tony.

The two other officers involved in the April 18 were not dismissed.  Sheriff Tony said  Deputy Ralph Mackey, will receive a written reprimand for not turning on his body-worn camera during the incident, and the investigation against the other officer, Sergeant Gregory LaCerra, is not complete.