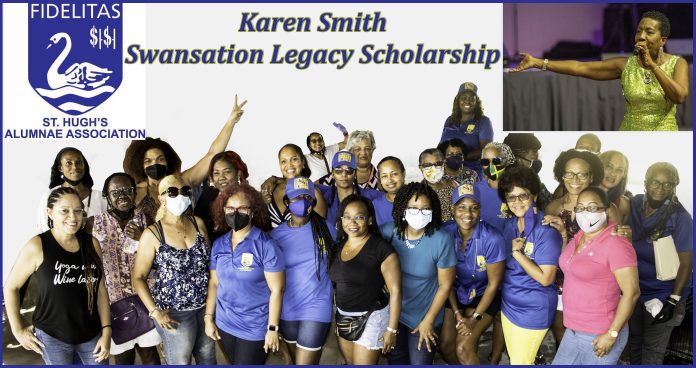 In honor of their ‘Swansation Songbird,’ The St Hugh’s Alumnae Association of South Florida has launched a merit scholarship to provide bursary assistance to at least one student at the institution.  The official name of the scholarship is the ‘Karen Smith Swansation Legacy Scholarship.’  Karen Smith who passed away on September 11th, attended St Hugh’s from 1971 to 1976.

In a moving tribute at their annual Family Fun Day in Sunrise, Florida, her friend and classmate Karleen Foster, shared more of what we have come to know about Jamaica’s songbird, over the last week.

“Those who knew Karen Smith know that if ever there was a perfect human being it was Karen. She was an earth angel – she was compassionate, generous and had such a giving heart. She was always embracing and uplifting members of her St. Hugh’s family,” Foster told the group of nodding heads which included several representatives from other schools.

She spoke of Karen as a talented, gracious, charming, and spirited person who made everyone feel special.  “She would light up any room she entered with her oh so beautiful smile. She would greet you as Precious, Sweet Girl, Lovely Lady or Darling.”

Foster said that her friend’s “unforgettable melodious voice, beautiful spirit and stellar performances have given pleasure to so many people both in Jamaica and internationally.”

“We can say that Karen left us too soon, but God had plans and sent his angels for her. He needed her angelic voice and I know she is up there clicking her fingers and dancing,” added Foster.

Past president of the Florida chapter and scholarship committee member, Karen Murphy, said the scholarship would go to an eleventh-grade student who is excelling in the music program.  The recipient will be chosen on a merit basis by the school, Murphy told Caribbean National News Weekly.

“After we lost our dear sister Karen Smith last Saturday, the South Florida Chapter established on September15th, an annual scholarship in her memory.”   Murphy said the lucky student will have their school fees, supplies, and incidentals including transportation taken care of.

In paying tribute to Smith’s many years of performance at the alumnae’s events, the group also released four white doves; three representing the holy trinity and the other for Karen.  On hand to help, was the consul general for southern United States, CG Oliver Mair.