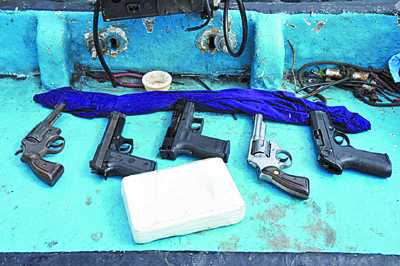 Five men, four Venezuelan and one Trinidadian, were arrested and charged with illegal firearm and ammunition possession during a raid in San Fernando on Thursday.

During the raid that took place along King’s Wharf around 3 p.m. police also uncovered large amounts of marijuana and cocaine.

The officers of San Fernando CID and Southern Division Task Force and Customs and Exercise Divison searched through several shacks, boats and abandoned buildings in the area.

Police found two Taurus pistols and six rounds of ammunition in a wooden shack and .357 Magnum revolver in another building.

Police seized a total of 94 grams of cocaine valued at $45,000 and 1.2 kilograms of marijuana valued $70,000, no arrests have been made in connection to the drug find.