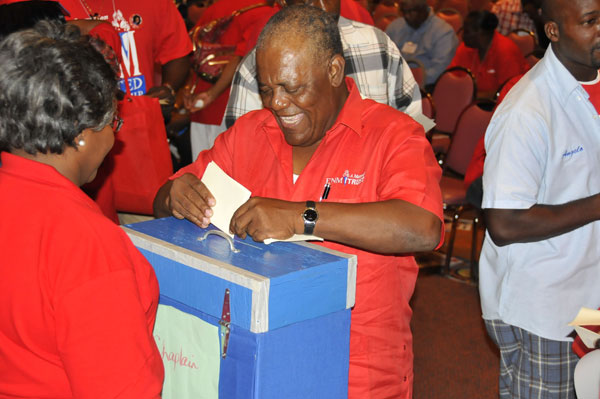 A confident Democratic National Alliance (DNA) has named its shadow cabinet as Bahamians await the date for the next general election.

Prime Minister Perry Christie has already indicated that the Parliament will be dissolved on April 11 and that the writ for the poll will be issued on that day. He has however not yet made public, the date for the election.

But DNA leader, Branville McCartney, in a lengthy statement said  the party has been able to launch its “impressive slate of candidates comprised of some of the best and brightest in the world of finance, business, law, law enforcement, healthcare, labor and civil society”.

He said outside of the role of the Attorney General which, under the DNA will be an independently selected Bahamian chosen from civil society and the Minister of Foreign Affairs, “members of the Shadow Cabinet as outlined will speak to the issues plaguing their specific portfolios, offering not just an opposing view but a glimpse into how a DNA government will – in the short, medium and long term – reverse some of the distressing trends which have emerged in our 21st century Bahamas”.

McCartney, who said he will be responsible for National Security & Immigration, said that “in the coming weeks and days Bahamians will be able to see, hear and feel the DNA in a way that speaks to their needs at every level and through the voting public will usher in a new era of governance in our Bahamas”.

He described the “shadow cabinet” of comprising “patriotic Bahamians” and “qualified non-career politicians whose main goal is to bring effective transparent and accountable governance to the people of this country”.

The other two main political parties hoping that will contest the elections are the ruling Progressive Liberal Party (PLP) and the main opposition Free National Movement (FNM).