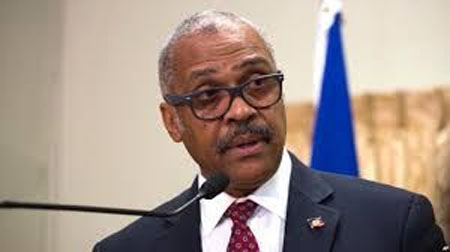 The Haitian government has called on persons pretending to be members of the soon to be reconstituted national army to end their practice or they’ll be prosecuted for the possession of illegal arms.

Haiti’s Prime Minister Jack Guy Lafontant said armed individuals, dressed in military uniforms, have been identifying themselves as members of the Haitian Armed Forces, and occupying the streets of the capital and certain provincial towns by claiming to be part of the military.

The prime minister said such actions contravenes the Haitian Constitution, particularly the provisions of the Criminal Law.

“The reconstitution of the Haitian Armed Forces must be no pretext for anyone to give themselves titles and statutes that the law does not recognize, and take advantage to sow confusion in public opinion and create public disorder.

Recruitment conditions provided for in Constitution

“The conditions of recruitment and engagement in the armed Forces provided for by the Constitution, are determined by law,’ Lafontant said.

He warned that “armed individuals posing as demobilized soldiers must report to the Office of Management of Demobilized Military to hand over all state property in their possession including weapons, ammunition, equipment and uniforms.”

He said failure to do so could lead to those persons being charged and prosecuted for the possession of illegal possession of firearms. “The General Coordinator will make every effort to ensure the success of this operation.”

The government said that since 2004, the State has set up the Demobilized Military Management Office (BGMD) which has been carrying out the compensatory indemnity program granted to the military because of their demobilization which is in its third and final phase.

Last week, Haiti’s Prime Minister Lafontant shied away from confirming whether or not Haiti’s new army will be officially commissioned on November 18, promising however that it will not be one aimed at tormenting the population.