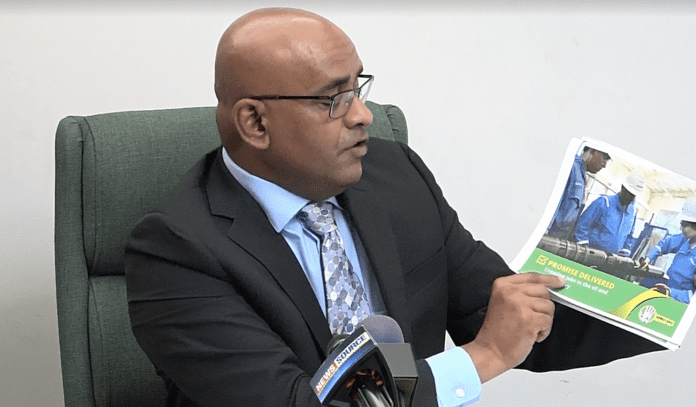 GEORGETOWN, Guyana, CMC – Leader of the main opposition People’s Progressive Party (PPP), Bharrat Jagdeo, has dismissed the findings of a poll commissioned   by the government and conducted by the Barbados based CADRES Organization.

According to Jagdeo, the poll which   showed high approval ratings for President David Granger and low ratings for the PPP Presidential Candidate Irfaan Ali, it was nothing more than a “fake poll”.

The Opposition Leader told NewsSource Guyana that he does not understand why the coalition would allow a poll for internal party studies to be made public stating that he is not impressed by the findings, especially when it comes to the approval ratings for the President.

“This so-called high approval ratings for President Granger may come from people who might vote for the PPP Civic and I suspect that the polls will not only speak about President Granger’s approval”, he said.

Concerning the poll’s questions about the likability of the Presidential candidates for the next elections , he said if the poll were to question people about the President keeping promises, “he would get zero”.

The Opposition Leader said he would be more concerned about what the poll has to say about who wins the election rather than the personality of the candidates.

He said with such high approval ratings, as found by the CADRES poll, the President should have called elections immediately after the no-confidence vote and not challenge the outcome.

The poll  conducted in February,  found that 84 per cent of  the supporters for the APNU+AFC coalition, believe that it wwill be reelected, while 87 per cent of the supporters of the PPP are of the view that the Opposition party will take the reigns of Government.

The poll also found that while President David Granger is heavily favored as the more popular candidate when compared to the PPP Civic’s Irfaan Ali, there is an even split among the population when it comes to the perception of which party will win the next elections and which party is enjoying overall support.