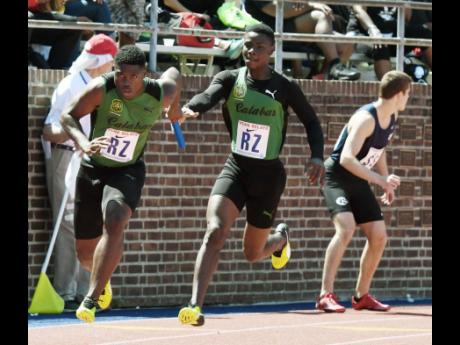 Boys Championships winners, Calabar High School, took their act to the annual Penn Relays in Philadelphia last weekend. They smashed the record in the 4×100 for high school boys last Saturday in an impressive 39 seconds.

The previous record, 39.63, was destroyed by the quartet of Tyreke Wilson, Christopher Taylor, Michael Stephens, and Dejour Russell. Calabar finished ahead of former record holders and arch-rivals, Kingston College, who placed second in 39.74 seconds.

The men were anchored by Fitzroy Dunkley, who erased a 10-meter deficit to give his team victory over the US in 3:03.14 seconds. The Americans finished in 3:03.25.

In the women’s equivalent, Stephenie-Ann McPherson, Shericka Jackson, Dawnalee Loney and Janieve Russell won in 3:28.32, well ahead of the US, who clocked 3:29.30.

The Jamaican women were second in the sprint medley. The team of Audra Segree, Natasha Morrison, Anastasia Le-Roy and Verone Chambers clocked 1:36.67 behind the USA (1:35.59), with USA Blue third in 1:37. 22 minutes.