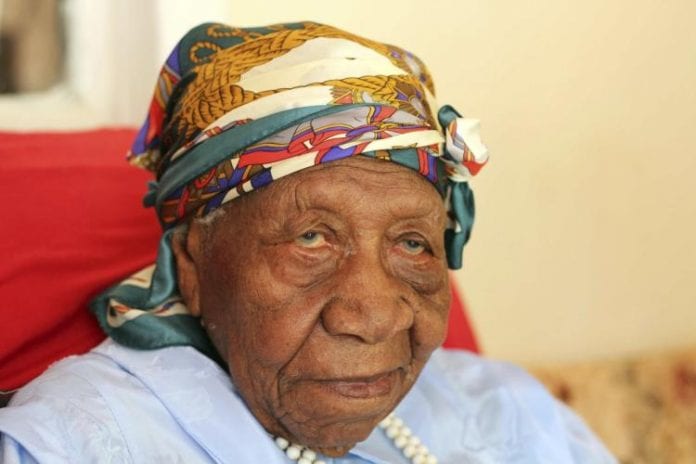 A request by Jamaican super centenarian Violet Moss Brown, affectionately known as Aunt V, once the world’s oldest woman, was the source of a scathing attack launched by her son during a thanksgiving service for her life on the weekend.

Aunt V, who died on September 15 at the age of 117, made it clear that she wanted her body donated to the University of the West Indies (UWI) for medical research purposes.

Addressing the crowded church during the service on Saturday, her son, Barry Russel, had harsh words for residents of the community of Duanvale in Trelawny parish, where his mother lived. The residents had sternly objected to the donation of Aunt V’s body to the UWI, stating that she wanted to be buried in the community, close to husband who predeceased her.

White rum and chicken back.

“Now she is dead she is supposed to be buried where they want her to be buried. I want to tell those who decided to make a big fuss over burying her here, that I think it was just about a bottle of white rum and some chicken-back,” Russel said.

Russell vented his anger in a speech lasting several minutes. During the speech, the church’s pastor, attempting to temper his anger, interrupted by asking the congregation to join in a hymn. However, after the singing Russell continued to vent, claiming his mother’s body will be of much more value to the University.

Hit out at media

However, Russel’s mother’s body, was not the only source of contention at the funeral service. He also hit out at the media, claiming that he was concerned about reports of a disagreement between family members about the care of his mother in her final days.

According to media reports, Moss Brown died just days after her family was involved in a “tug of war” as to who should care for her.”

Following Russell’s address, Minister of Culture, Gender, Entertainment and Sports Olivia “Babsy” Grange, who represented Prime Minister Andrew Holness at the thanksgiving service, called on the bereaved family, and the general community, not to bring Miss V’s name into disrepute.

“I make a special appeal to you, make her proud, make Jamaica proud. And don’t do anything at all that will make you or anyone else ashamed,” Grange said.

World’s oldest woman dies days after being moved from home