Barbados and Suriname to implement initiatives to enhance cooperation 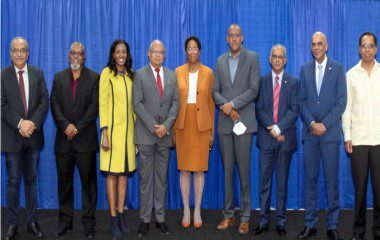 Barbados and Suriname have agreed to implement initiatives “aimed at arriving at practical and tangible results” from the partnership between the two Caribbean Community (CARICOM) countries.

A joint statement issued on Tuesday following the “Barbados-Suriname Dialogue: Renewing Mutual Interest & Strengthening Bilateral Relations,” noted that the foreign ministers from the two countries met last Friday “with the aim of renewing mutual interest and strengthening bilateral relations between the two countries.”

“During their dialogue exchanges, strong historical and cultural links were highlighted as they recalled the tenets of the Brokopondo Program for Cooperation 2018 to 2021,” according to the joint statement, adding that the meeting “resolved to implement new initiatives in the areas of political consultation and collaboration, agriculture, animal husbandry and fisheries, trade and investment, transport and tourism, natural resources, energy and the environment, as well as education and training, youth and the creative industries”.

It said the two sides agreed to elevate the cooperation at the highest political level, aimed at arriving at practical and tangible results that will benefit both countries throughout the partnership.

“In addition, an action plan will be developed with clear timelines and targets to be executed by relevant stakeholders from both parties. To this end, it is envisaged that both leaders will launch a cooperation framework.

“The Barbados and Surinamese authorities agreed that solidarity, dialogue and cooperation are crucial in order to jointly address matters of mutual concern and interests at the bilateral, regional and global levels,” the joint statement noted.