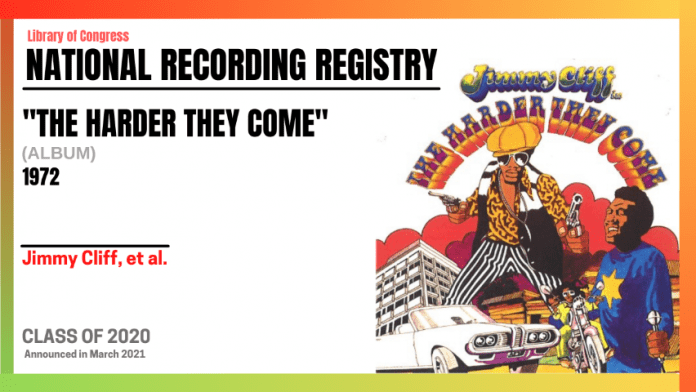 The classic reggae album, The Harder They Come by reggae legend Jimmy Cliff has been inducted into the National Recording Registry of the Library of Congress.

Librarian of Congress Carla Hayden on March 24 named 25 recordings as audio treasures worthy of preservation based on their cultural, historical or aesthetic importance in the nation’s sound heritage.

“The National Recording Registry will preserve our history through these vibrant recordings of music and voices that have reflected our humanity and shaped our culture from the past 143 years,” Hayden said.

“We received about 900 public nominations this year for recordings to add to the registry, and we welcome the public’s input as the Library of Congress and its partners preserve the diverse sounds of history and culture.”

The Library of Congress is America’s oldest federal cultural institution and serves as the research arm of Congress.

Each year, the National Recording Registry at the Library of Congress chooses 25 recordings showcasing the range and diversity of American recorded sound heritage in order to increase preservation awareness.

The Harder They Come soundtrack to the 1972 film was among the 2020 selections and is the second reggae album to ever be inducted into the United States’ recording registry. The first was Burning by The Wailers, added in 2006.

The soundtrack album, which featured other reggae musicians such as The Melodians, Desmond Dekker and Toots and the Maytals, is said to have brought reggae to the world, and pushed catalyzed Jimmy Cliff to international fame.