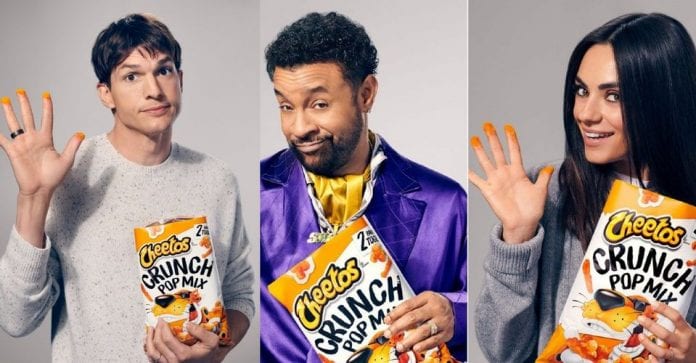 Shaggy’s hit song, “It Wasn’t Me” – a track about cheating in relationships has taken on a new meaning.

Instead of being caught “red-handed” like in the song, Kunis is caught “orange-handed”, with a bag of Cheetos belonging to her husband. Shaggy appears in a purple jacket, similar to one he wore in the official music video for the single, advising Kunis that she could simply tell Kutcher “it wasn’t me”.

According to Adage.com, the 60-second ad will air during the third quarter of the Super Bowl game on February 7.

The ad is a nod to the 2000 international hit by Shaggy, which helped catalyzed him to superstardom. The release of the commercial for Super Bowl LV also marks the 21st anniversary of the song.

It Wasn’t Me” was Shaggy’s first number one hit in the United States.

The song also reached number one on the UK Singles Chart, making the song a transatlantic chart-topper.  It is also the 11th biggest selling single of the 21st century in the United Kingdom, with sales of over 1.42 million as of September 2017.

“Mila and I both remember when ‘It Wasn’t Me’ came out 20 years ago when we were first working together on That 70s Show, so it’s really cool to come full circle with Cheetos, work together again and remix this song,” Kutcher said in a press release.

“We’ve rarely done projects together since then, but the concept was so fun and relatable. And we couldn’t pass up the chance to be in this Super Bowl commercial.”

This year’s super bowl game will take place at the Raymond James Stadium in Tampa, Florida.