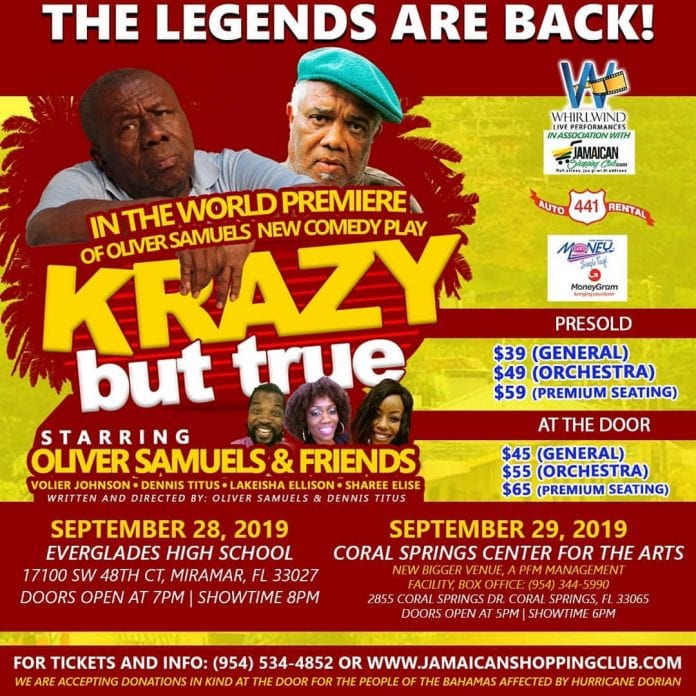 MIRAMAR, Florida – Comedy legends Oliver Samuels and Volier Johnson will bring a barrel of laughter to Florida as they star in the gala world premiere of new comedy Krazy but True, set for September 27 to 29.

Oliver delivers one of the most powerful and memorable performances in the history of his career, as he masterfully takes on the role of a mentally challenged man.

Two years ago, when Whirlwind Live Performances CEO approached Oliver Samuels about premiering a play outside of Jamaica in Miramar, Florida for the first time, he promised Oliver a sold-out show if Samuels agreed to make the bold unprecedented step. A friendly wager was made then, that if Whirlwind could sell out a Jamaican play never shown in Jamaica, Oliver would commit to doing one more world premier in South Florida as a show of appreciation for the support Caribbean residents in the region have shown him over the years and the recognition of the international appeal of his art.

Not only is South Florida’s showing of Krazy but True a world premier but it has a special meaning this year as the promoters will be collecting non-perishable donations for Bahamian Hurricane victims. It is also special for many South Floridians who are used to family and friends in Jamaica calling them or posting on social media about the next play coming, but now it is the reverse—South Floridians can now boast that they saw it first.

This first-ever showing of Krazy but True in South Florida continues to highlight the strength of the region as a powerhouse of Caribbean culture. The area boasts the Best of the Best concert, West Indies vs India cricket matches, hosts the cruise ship ports for both the Welcome to Jamrock and Love and Harmony Cruises, one of the biggest Jerk Festivals in the world and now can proudly claim not one but two of Oliver Samuels’ world premiers with Volier “Maffy” Johnson by his side promising to make Jamaicans laugh as hard as they did in the 80s when the two dominated Jamaican TV making the city of Kingston a literal ghost town when they were on, as people were glued to their TV.

There will be three showings of Krazy but True on its Premier weekend: Saturday, September 28, at 8 p.m. at Everglades High School in Miramar; Sunday, September 29 at 6 p.m. at the Coral Springs Center for the Arts and Monday, September 30 at 8 p.m. at the Port St. Lucie Community Center. All the shows are reschedules of Oliver’s 7th Annual Labor Day show weekend in Florida, which was postponed due to the threat of Hurricane Dorian.