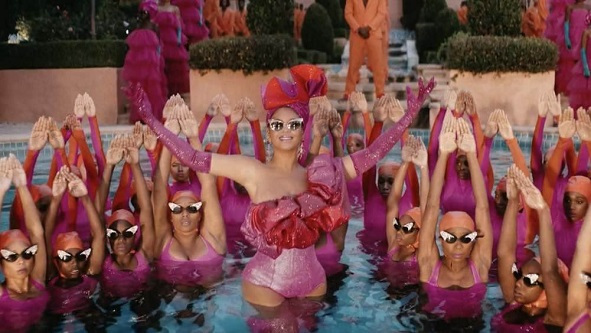 While Beyoncé’s latest visual album, Black is King, was celebrated by fans around the world for its stunning visuals and nod to African culture, it was the inclusion of Jamaican synchronised swimmers that caught the attention of many Jamaicans.

The project, which reimagines the story of the Disney blockbuster The Lion King, for which she voiced Nala in the 2019 remake, has been trending on social media since its release on Disney Plus on Friday.

The renowned Aqua Lillies swimmers, which comprises of teams from around the world, posted a clip of the video and mentioned the island’s synchronised swimmers who also featured, calling them a “dedicated team of young competitive athletes based in Port Antonio, Jamaica”.

The swimmers were featured in the video for Beyonce and Jay-Z song, “Mood 4 Eva”.

In September 2019, Jamaican Synchronised Swimmer and former Florida resident, Nicole Chin Shue was contacted for the project by Beyonce’s team.

“My manager, Mary Ramsey, reached out to me by e-mail saying, ‘An award-winning Grammy artiste is seeking deep skin toned synchronised swimmers for a music video’… I wasn’t pushing for anything because I’m doing my private lessons swimming [in Jamaica]. She again reached out to me a couple days after, pushing it… saying: Nicole, I think you should look into this. I would really like if you could be here for it. I said: ‘Okay. You could submit me,’ “ she said.

Chin Shue said she learned days after it was a project involving “Queen Bey”.

“I mentioned that there’s a team in Portland with a couple of girls that could be part of it… they got in touch with them and they booked the gig as well… So five girls from Portland’s Island Aquatics Synchro Club and myself were in the project,” she continued.

At the two-day shoot, Chin Shue said she got the chance to speak with Beyonce and thanked her for the opportunity.

“I told her thank you for the opportunity and allowing us to be here. She said the she understood the challenges of being a person of colour in the industry to make a living, but we should never give up,” said Chin Shue.

The inclusion in the film is a major boost for the local synchronized swimming industry, which lacks the support of locals. The team said it it their dream to make it to the Olympics, which has never been done before.