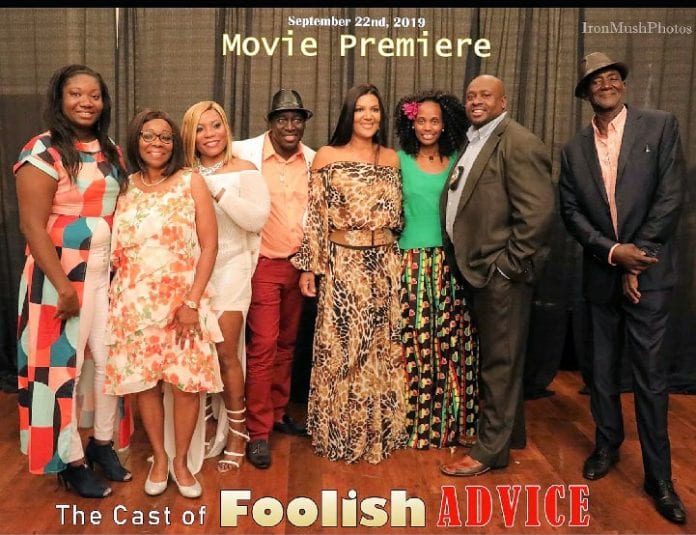 Chin plays Suzie, wife of Whyte’s character Jonathan, in a play based on the Old Testament story of Hosea and Gomer.

“The premier was like a dream come through. It was everything I anticipated and more,” said Chin. “The love and support from the community, family and friends, was overwhelming.”

The Clarendon-born actress previously worked with Whyte on For Better For Worse, a 2008 play. She did not know much about the tale of Hosea whose marriage to Gomer, a prostitute, is marred by her serial infidelity.

Chin was excited about the project after reading the script and getting familiar with the story of Hosea and Gomer. She believes persons in troubled marriages should see Foolish Advice.

Foolish Advice is also the first crack at film making for Whyte whose stage credits also include the 2017 play, God Over Obeah. An ordained minister of religion, he won the Festival Song Contest in Jamaica in 2003 and 2004 with Jamaican Tour Guide and Ole Time Jamaica.

Chin, who lives in New York, says she started acting in elementary school in Jamaica. She first met Whyte eleven years ago when she auditioned for a part in For Better For Worse.

“At the time I showed up it was pretty late in the game, casting for the play was pretty much over, all the lead roles were taken except the one for prostitutes for the street scenes,” she recalled. “Upon realizing this, I remember saying to myself, ‘just my luck, we all have to start somewhere’. On the third run of that play my luck changed drastically, and I went from playing a prostitute to playing the lead role of the wife which is how I ended up with the part of Suzy in this movie.”

Foolish Advice took two years to finish on a budget of US$10,000. Filming took place in Miami, Port St. Lucie and Palm Bay. The all-Jamaican cast is rounded out by Shirley Petersen, who plays Suzie’s mother; Belinda Bartley as Dawn; Sharon Cain as Jennie, a prostitute and Tano Bogle, Jonathan’s boss.

Foolish Advice is expected to play in Fort Lauderdale and West Palm Beach in November at venues to be decided.