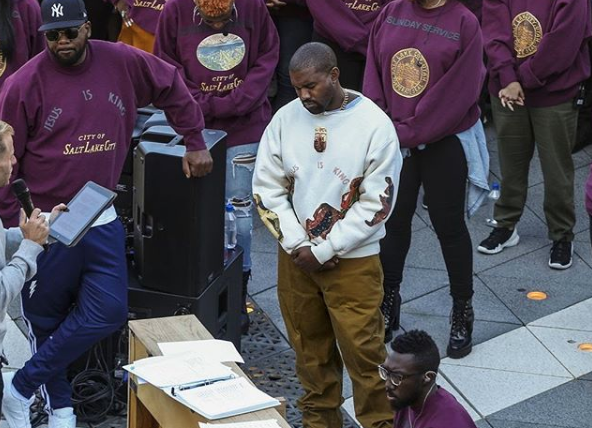 The Grammy-award winning rapper, who has never shied away from religion in his music, started Sunday Service in January of this year, on his ongoing search for spiritual redemption. The “church-ish” gathering combines fashion, music, and of course religion, providing a space where fans of the hip-hop artist can celebrate with him. He is also putting the finishing touches on his ninth studio album, “Jesus Is King”, which he has already sparingly incorporated into the concerts.

West and “The Samples” gospel Choir, led by director Jason White,  lead the weekly service performing popular gospel songs along with gospel-inspired remixes to the most popular songs across different genres. The concert series initially began at Kanye’s private residence in Calabasas, Los Angeles, but has since been brought to other cities including Chicago (where West was born), Wyoming, New York, and Dayton, Ohio.

The concert series also started as an invite-only event but became open to the public in other cities. His concert in Jamaica marks the first “Sunday Service” that has been held outside of the United States.

When asked what inspired the decision to bring Sunday Service to Jamaica, the Producer for the concert series, Jonathan Coleman says a Jamaican employee was the one that convinced Kanye. “Mr. West has an employee who is from Jamaica, and he was just talking about Sunday Service and she said, “You should go to Jamaica.”

“Jamaica has completely rolled out the red carpet for us to be able to bless the people with the spirit of God through Sunday Service”, he added.

The 2-hour concert began at 7:00 PM on Friday night, with his entire team decked out in shirts and hats that donned the “City of Kingston” logo. West flew his entire 120-member team to Jamaica to perform the free concert at Emancipation Park. Although the concert was announced just two days before the show, thousands of patrons from all age groups showed up to see the rapper in-person.

Following the show, the rapper made his specially-made Jamaica Sunday Service clothing available online via his website. Jamaicans that were at the show also got free merch from Kanye’s team.

Kanye West is reported to have spent over USD $1 million to stage the concert in Kingston. “It is at no cost to the Jamaican government or the Ministry and Jamaica is benefiting,” said the Minister of Culture and Entertainment Olivia Grange.

“Kanye West is paying for absolutely everything and will be spending over one million US dollars for this event in Jamaica. They’ve covered their own air charter and local hotel accommodation. They’re spending a substantial amount on technical services to be provided by local suppliers; a large number of Jamaicans will be hired to treat with the production. And the facilities that we are providing that are to be paid for will be covered by Kanye West,” she added.

The government of Jamaica said they were proud to facilitate the concert because of what it will mean for Jamaica’s future as a tropical entertainment destination. More often than not, the Caribbean region is overlooked by international artists when it comes to tours and concerts. Even though Caribbean culture, and specifically Jamaican culture, is popular across all genres of music, artists traditionally do not add the region to world tours.

The worldwide popularity of new-school reggae and dancehall artists like Chronixx, Koffee, Spice, Popcaan, and other others have brought an international focus to Jamaica not only as a top tourist destination, but an entertainment destination as well.