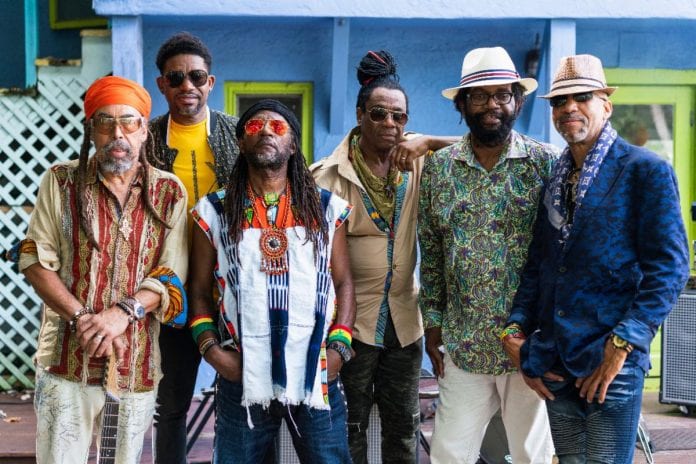 “An Evening With” series aims to provide intimate, moderated conversations with iconic recording artists about their creative process, history, current and future projects, to the Newark, NJ community. An Evening with Third World includes a conversation and Q&A with audience members as well as video and audio selections from the group’s album More Work To Be Done.

Celebrating over 45 years, the ‘Reggae Ambassadors’, Third World is one of the longest-lived Reggae bands of all time, and one of Jamaica’s most consistently popular crossover acts among international audiences. Mixing in elements of R&B, funk, pop, and rock and, later on, dancehall and rap, Third World’s style has been described as “reggae-fusion”.
Singer Bunny Rugs described the band’s sound: “Strictly a reggae band, no. Definitely a reggae band, yes.” Guitarist Cat Coore said of their music: “The hybrid of various types of music is a natural thing because, by growing up in Jamaica, we know the direct roots of reggae and ska. At the same time, we live in a country where you get to hear Chuck Berry, Fats Domino and all the R & B artists.” Bassist Richard Daley said, “We took roots reggae music and put branches on top of it”.
Most recently, Third World released their highly anticipated 22nd studio album titled More Work to Be Done. The album is produced by multi-Grammy-award winning artist/producer Damian “Jr. Gong” Marley and features an incredible array of artists: Chronixx, Tarrus Riley, Busy Signal, Pressure Busspipe, Tessanne Chin and Damian“Jr Gong” Marley, courtesy of Ghetto Youths International. More Work to Be Done has been nominated for the 62nd Annual Grammy Awards in the category Best Reggae Album.
“There are few bands that have been able to consistently push musical boundaries while holding firmly to their roots as Third World has done for over 45 years,” said Mark Conklin, Director of Artist Relations & Programming, GRAMMY™ Museum Experience Prudential Center. “We’re thrilled to welcome them and celebrate their newest release at GRAMMY Museum Experience™ Prudential Center. ”