Jamaican actress Judi Blair has landed herself a role on Tyler Perry’s daytime show “If Loving You is Wrong”.

Born in Clarendon, Jamaica, the actress is no stranger to the acting world, having had minor roles in “The Game” , “Vampire Diaries”  “Single Ladies” , “Hear No Evil,” “My Other Mother, ”Lyfe’s Journey,” and “My First Love”.

Blair discovered her love for entertainment as a young girl in Jamaica, after watching her eldest sister compete in the “Miss Jamaica” pageant, which ignited in her a passion for the runway, inspiring her to emulate the glamour models she saw onscreen and in magazines.

After migrating to the United States at age 14, Blair turned her attention to acting, beginning lessons to immerse herself in developing her craft.

If Loving You is Wrong is aired on the OWN channel on Tuesdays at 9 pm. 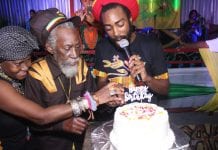