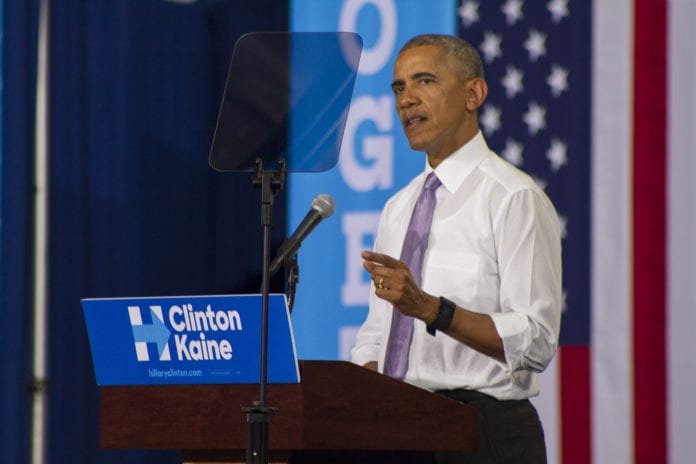 Obama stomps for Obamacare in Miami

Before addressing a large crowd at a Clinton campaign Rally at Florida Memorial College in Miami Gardens on Thursday afternoon, President Barack Obama made another case for the important legacies of his presidency, the Affordable Care Act, popularly called Obamacare.

Speaking at the Wolfson campus in downtown Miami, the president cited that Obamacare has improved the affordability of healthcare for millions in the country, including residents of South Florida. He said although the ACA isn’t perfect it has provided more Americans with health insurance. Because of the ACA the uninsured rate in the US was now 8.6 percent nationwide. “Never in American history has the uninsured rate been lower than it is today,” he said.

En route to Miami on Air Force One on Thursday, White House deputy press secretary Eric Shultz told reporters Miami-Dade Colle was selected for the president’s speech because of the role played by students and college staff in hosting Obamacare enrollment drives. The enrollment period for 2016/2017 begins on November 1, nationally.

Obama took the opportunity of his speech to urge Florida Governor Rick Scott and Republican members in the state’s Legislature to approve Medicaid Expansion “so more poor Florida residents can be covered.” Under the ACA provisions are made for lower-income Floridians to receive health coverage under Medicaid, and for the state to receive millions of dollars in federal money to meet the cost of expanding Medicaid to these residents. However, Scott and the majority of Republicans in the Legislature, have stubbornly opposed expansion of Medicaid. Obama said more than 700,000 Floridians would be covered under Obamacare if the state accept Medicaid Expansion.

Acknowledging that Obamacare was not perfect, the president urged Congressional Republicans and Democrats, state  governors and legislators should work together to improve the healthcare law, and forget about repealing it. “Repeal is not the answer.” He said he would support any plan to improve the law once this plan offers more Americans insurance coverage, “even if they change the name of the law to Ryancare (referring to House Speaker Paul Ryan) or Reagancare (referring to former President Ronald Reagan).”

Alongside expanding Medicaid to Floridians and the citizens of 18 other states Obama suggested that the impact of the ACA could improve by reducing the costs of prescription drugs; and increasing financial aid for people still struggling to afford insurance.

The president expressed concern that not enough young Americans have signed up for Obamacare coverage. He said this problem accounts for the higher premiums insurance companies are charging. He encouraged his audience, most of whom were students, to be sure to enroll this year.

Florida currently accounts for the largest number of people registered under the ACA. According to the US Department of Health and Human Services, 1.5 million Floridians signed up for health insurance for coverage in 2015/16. Miami-Dade County has the most enrollees with 392,901, followed by Broward County with 241,784. Palm Beach County had 148,961 enrollees.