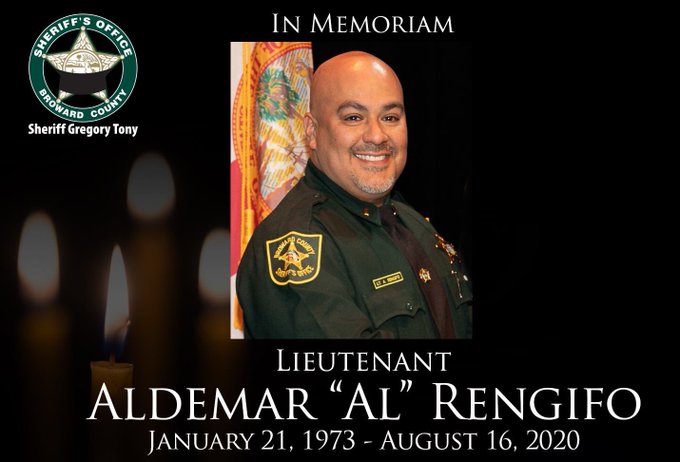 Broward Sheriff Gregory Tony confirmed that the Lieutenant passed away on Sunday morning.

Rengifo was hospitalized on July 27 after testing positive for COVID-19. It is not known whether he contracted the virus while on duty.

Sheriff Gregory Tony said Rengifo was a true professional, in his statement honoring the officer.

The 47-year-old was with BSO for over two decades, joining the department in January 2000, according to a news release.

Rengifo had recently been working with the Youth and Neighborhood Services Bureau. He previously worked in the Internal Affairs and Criminal Investigations divisions.

In 2012, he was recognized as Detective of the Year for his leadership and keeping residents safe.

“He held himself to the highest standards and took pride in his work,” Tony said. “He led with honor, dignity, integrity and projected a positive and professional image upon himself in BSO.”

As of Sunday morning, out of 5,688 employees with the Broward Sheriff’s Office, a total of 498 have tested positive for COVID-19.

Of those, 362 have since received negative tests and are either back at work or in the process of returning. BSO has 136 employees that are currently positive for COVID-19.

There have been four coronavirus-related deaths among BSO employees; two sworn officers and two civilians.

Back in April, Deputy Shannon Bennett was the first South Florida first responder to die due to complications of COVID-19.

Tony said that when it is safe for the community to be together, BSO will host a memorial service to honor Lt. Rengifo’s life. He is survived by his wife and teenage son.